The U.S. Outer Continental Shelf (OCS) includes the area between state jurisdiction to 200 nautical miles (nm) from shore. State jurisdiction over the seafloor extends from the shoreline out to 3 nm, except for Texas and the Florida Gulf Coast, which extend out to 9 nm. The 200-nm seaward boundary may occasionally differ depending on an area’s geography and geology. 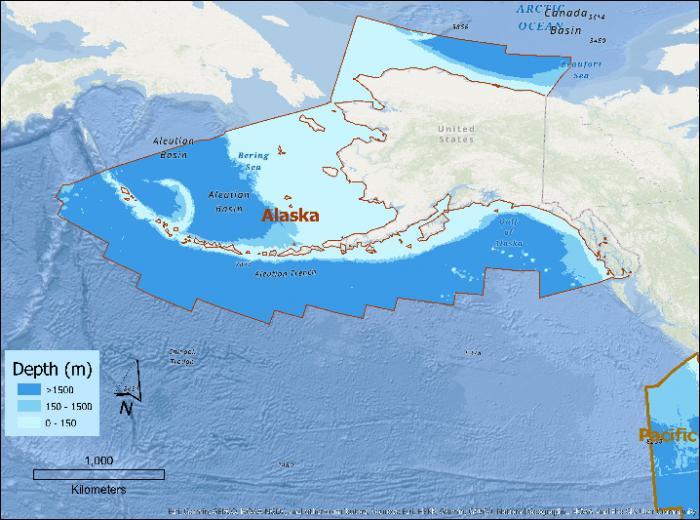 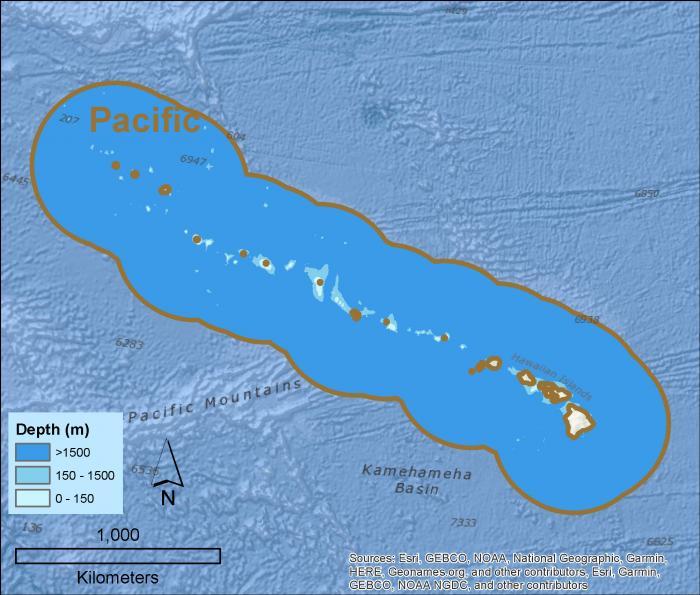 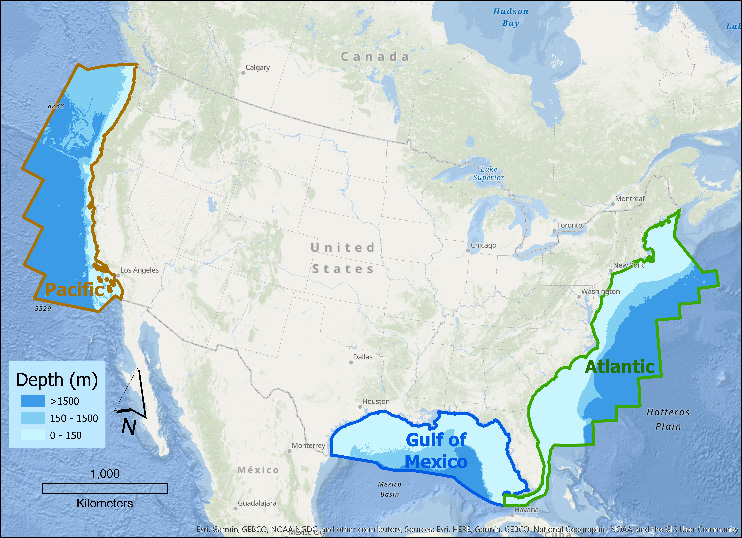 The Alaska OCS Region, which is the largest, has diverse geography, the longest coastlines, and the deepest water. The north-eastern part of the region contains the Beaufort Sea, which is part of the Arctic Ocean. The Beaufort Sea has a narrow shelf, many submarine canyons, and is covered by ice during the dark winters. Travelling counter-clockwise, one passes through the broad Chukchi Sea into the narrow and shallow Bering Strait. The Bering Strait is a narrow and shallow channel that has periodically formed a land bridge between Eurasia and the Americas during prehistoric glacial ages. South of the Bering Strait is the ecologically productive Bering Sea. The eastern half of this sea is a relatively shallow (less than a 100 meters deep), while the western portion reaches depths of 3,000 to 4,000 meters. The Aleutian Island chain forms the southern border of the Bering Sea; this 1000-mile-long volcanic island arc separates the deep Aleutian trench (with depths of 7,000 to nearly 8,000 meters) to the south from the shallower Bering Sea to the north. To the east of the Aleutian Island chain is the Gulf of Alaska (3,000 to 4,000 meters deep), an ecologically productive part of the northern Pacific Ocean.

The Pacific OCS Region is shaped by an active geological margin. In the northern portion of the region near Washington, Oregon, and northern California, the relatively small Juan de Fuca Plate is subducting under the North American tectonic plate. The processes affecting this geologically complex area have influenced the development of the Cascade Range, the Cascade volcanoes, and a series of ocean trenches and faults. To the south, in central and southern California, the San Andreas Fault forms the boundary between the south-moving North American Plate and the north-moving Pacific Plate. The relatively narrow shelf, which rapidly drops to depths of 3,000 to 4,000 meters, is a byproduct of the now inactive subduction zone that shaped much of the southwestern U.S.

Although part of the Pacific Region, Hawaii stands alone geologically. The island chain is shaped by the slow northwesterly motion of the Pacific tectonic plate over a mantle hot spot, moving a few inches each year. As the Pacific Plate moves over the hot spot, an erupting shield volcano builds up from the ocean’s bottom and emerges as an island. Once the new volcano moves far enough past the hot spot, it becomes dormant, allowing yet another new volcano to form over the hot spot. Eventually, after millions of years, the extinct volcanoes sink back below the ocean surface through a combination of erosion and subsidence of the dense ocean crust. The oldest island, Kure Atoll, is almost 30 million years old, and is in the northwest; the youngest, the “Big Island” of Hawaiʻi, is still forming in the southeast. The shallower areas around the Hawaiian Islands support a biologically diverse coral ecosystem and are ecologically and economically important.

The Gulf of Mexico OCS Region is dominated by the Gulf of Mexico, a semi-enclosed marginal sea, which is fed by the Atlantic Ocean. Formed during the breakup of Pangea in the Mesozoic Era, this area contains abundant oil-rich deposits of salt, limestone, and sandstone. Along the southern U.S. coast, the Mississippi River has deposited an enormous fan of sediment, extending about 600 kilometers offshore and containing about 400 trillion cubic yards of mud, silt, and sand, which is enough to fill over 70 Grand Canyons. Although the smallest by area, the Gulf of Mexico is currently the most important region for offshore energy production.

The Atlantic OCS Region is a geologically passive margin.  Tectonic and volcanic activity occurs 2,000 miles offshore along the mid-Atlantic Ridge, which is formed by the ocean’s spreading center where new ocean crust is continuously being generated. The passive nature of the Atlantic margin has allowed broad beds of thick sediment to accumulate along the East Coast, resulting in a wide and relatively shallow shelf. The shelf is deeply incised by submarine canyons, especially in the northern portion of the Atlantic Region, most likely a consequence of the powerful runoff from melting continental ice sheets at the end of glacial periods.