Partnering With The Smithsonian Institution 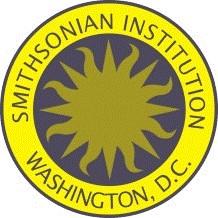 The Smithsonian’s world-class analysis of BOEM’s and other offshore invertebrate collections increases understanding of marine biodiversity and environmental change.

BOEM and the Smithsonian Institution have maintained a long and productive partnership since 1979, greatly benefitting both agencies, the scientific community worldwide, and, by extension, the public’s access to scientific information.

The invertebrate collections stored and studied at the Smithsonian’s National Museum of Natural History (NMNH) were amassed as part of BOEM’s research to characterize ecosystems and habitats on the U.S. Outer Continental Shelf (OCS) and to manage United States resources on behalf of the American people.

During this four-decade collaboration, scientists managing these invaluable federally funded scientific collections have identified 379 species new to science. They include specimens from all four U.S. OCS regions (Atlantic, Gulf of Mexico, Pacific, and Alaska).

BOEM’s partnership with NMNH recognizes the prominence of the museum’s Department of Invertebrate Zoology (IZ), in both its expertise and facilities, that improves the quality and value of BOEM’s Environmental Studies Program scientific collection. Located nine miles outside of Washington, D.C., the IZ collection at the Museum Support Center is immense. It currently holds more than 383,000 BOEM specimen lots among the 50 million specimens in the U.S. National Invertebrate Collection, gathered from many sources.

In recent years, the two agencies have expanded their partnership to include DNA barcoding of voucher specimens, which serve as physical examples of characteristics by which species can be distinguished and identified in the future. DNA can be used to help identify invertebrates in collections for natural history research. The combined information about a specimen’s physical appearance and its DNA barcode can improve the quality of ecological research and help detect cryptic or invasive species, as is being done through several studies described below.

Genetics research on BOEM’s specimens was incorporated into the Smithsonian’s larger contribution to the Global Genome Initiative (GGI), a worldwide initiative to preserve and understand the genomic diversity of life on Earth.

BOEM and NMNH IZ developed a Sample Strategy Plan (OCS Study BOEM 2019-003) with the goals of improving the representation of marine invertebrates in cryogenic (frozen) and tissue collections and providing voucher-based DNA barcodes for missing families and genera of marine invertebrates from U.S. waters. The data generated shed light on how changing ocean conditions may be affecting marine life and the availability of prey species for species higher in the food web.
The IZ sampling effort yielded several important results: 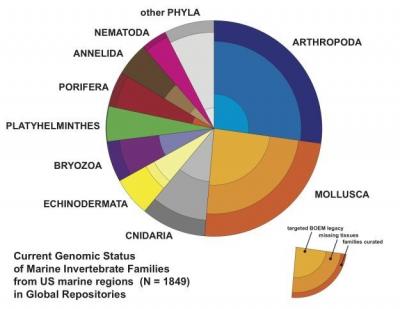 BOEM and the Smithsonian Institution continue to foster communication and cooperation and look to increase interagency collaboration.

In 2020, BOEM reaffirmed its commitment to the partnership through a new interagency funding agreement for five years of funding. BOEM’s partnership with the NMNH helps sustain IZ’s predominance as a worldwide authority for invertebrate taxonomy.

With the new interagency funding agreement, other benefits will accrue. First, the agencies will have improved flexibility to change focus and encourage a greater level of involvement by BOEM scientists. This may be beneficial for the shared goal of growing the OCS specimen collection in areas with emerging development interests. Second, BOEM is redesigning its Environmental Studies Program Information System (ESPIS), which the bureau anticipates using to exchange information with the NMNH catalog. Finally, BOEM anticipates addressing its education and outreach goals through this  partnership agreement by providing opportunities for internships at the Museum Support Center.

Background on the Long-term Collection

BOEM’s Chief Environmental Officer and staff from the Environmental Studies Program visited the NMNH in 2017 for a tour of the archival invertebrate collection and a briefing on the genomics work. Take a trip down memory lane to see the giant squids, tube worms, and refrigerated storage tanks, and learn about the innovative genetic sequencing NMNH scientists are engaged in. Decades after BOEM sent its first specimens to the Smithsonian for cataloging in the 1970s, today they are part of the GGI. Read more

The increase in marine Non-Native Species (mNNS) is a major issue surrounding the Alaska region, and in recent years, BOEM and the Smithsonian Environmental Research Center (SERC) have partnered on research. Below are two examples of their work on this topic. This joint science effort aligns with research conducted through a partnership between SERC, NMNH IZ, and GGI, including the BioBlitz in Dutch Harbor/Unalaska, located in the Alaska Aleutian Islands.

In this three-year study (2020–2023), the Smithsonian is helping BOEM evaluate the potential for an increase in mNNS in Alaska’s Chukchi and Beaufort Seas, where there is existing or potential offshore infrastructure. The study responds to a need to understand the changing climate coupled with increased shipping and other human activities. There are currently no tools or protocols in place to provide guidance for the early detection, containment, and/or removal of invasive species for oil and gas activities on the Alaska OCS. This study will create a baseline record of the current planktonic, benthic, and attached organism communities to provide a benchmark comparison to detect mNNS and develop early detection monitoring and response plans for any mNNS that is deemed invasive. Expected outcomes for the study are to have baseline data and a monitoring plan for the early detection of mNNS, and an associated response plan aimed at containing and eradicating detected invasive species.

Guide to Some Common Fouling Invertebrates of Alaska

From 2017 to 2018, BOEM, SERC, and the University of Alaska Anchorage collaborated on updating the “Guide to Some Common Fouling Invertebrates of Alaska.” The initial guide, which described 22 tunicate species, was started in 2010, when the Kachemak Bay National Estuarine Research Reserve (KBNERR) began to look for marine invasives and started to collect and preserve local tunicates in south central Alaska. Little information was available on Alaskan tunicates and other fouling organisms. The guide expanded under a partnership with SERC as stakeholders repeatedly requested a guide to help people distinguish between native and non-native species on the Alaskan coast. With the 2018 update, which includes color photos, seven more species have been added to the guide.

Additional invasive species monitoring is part of the Sample Strategy Plan mentioned above.

The SERC/IZ/GCI collaboration at Dutch Harbor was part of an allied effort to extend our ability to detect and monitor invasive species.

In the early days of the partnership, BOEM and the Smithsonian Institution collaborated on an oil spill recovery study in Panama from 1987–1991. BOEM funded the study and used the Smithsonian Tropical Research Institute’s pre-spill, long-term environmental and biological studies of the areas affected by the 1986 Bahía Las Minas oil spill. This was an unprecedented opportunity to study the fate of spilled oil and its biological effects in tropical Atlantic coastal environments. The study’s objectives were to monitor the long-term changes that may occur in the distribution and abundance of marine organisms as a result of that oil spill and to understand the ecological processes causing any observed changes.