BOEM is responsible for offshore renewable energy development in Federal waters. The program began in 2009, when the Department of the Interior (DOI) announced the final regulations for the Outer Continental Shelf (OCS) Renewable Energy Program, which was authorized by the Energy Policy Act of 2005 (EPAct). These regulations provide a framework for all of the activities needed to support production and transmission of energy from sources other than oil and natural gas. BOEM anticipates future development on the OCS from these general sources:

Offshore wind is an abundant domestic energy resource that is located close to major coastal load centers. It provides an efficient alternative to long-distance transmission or development of electricity generation in these land-constrained regions.

All wind turbines operate in the same basic manner. As the wind blows, it flows over the airfoil-shaped blades of wind turbines, causing the turbine blades to spin. The blades are connected to a drive shaft that turns an electric generator to produce electricity. The newest wind turbines are technologically advanced and include engineering and mechanical innovations to help maximize efficiency and increase the production of electricity. For more information about wind turbine technology, see NREL’s “Wind Energy Basics: How Wind Turbines Work". 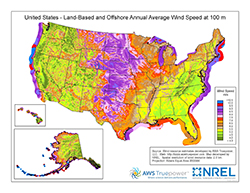 Ocean waves contain tremendous energy potential. Wave power devices extract energy directly from the surface motion of ocean waves. In many areas of the world, the wind blows with enough consistency and force to provide continuous waves along the shoreline.

A variety of technologies have the potential to capture that energy and some of the more promising designs are undergoing demonstration testing. The National Renewable Energy Laboratory (NREL) provides a number of useful maps and tools regarding wave energy resources, including a wave energy resource atlas, available at https://www.nrel.gov/water/data-tools.html.

The relatively constant flow of ocean currents moves large amounts of water across the earth’s oceans. Researchers are developing new technologies that can extract energy from ocean currents and convert it into usable power.

Some of the ocean currents on the OCS are the Gulf Stream, Florida Straits Current, and California Current.

While the United States and other countries are pursuing ocean current energy it is still in the early stages of development. Submerged water turbines, similar to wind turbines, may be deployed on the OCS in the coming years to extract energy from ocean currents. 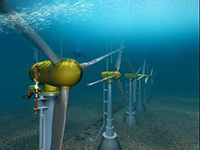 Since oceans cover more than 70 percent of the earth's surface, they receive an enormous amount of solar energy. Deep ocean currents, waves, and winds all are a result of the sun's radiant energy and differential heating of the earth’s surface and oceans.

While there are no commercial solar energy facilities currently operating offshore, solar radiation has the potential to be converted directly to usable energy through a variety of technologies, including concentrating solar power and photonic technology. 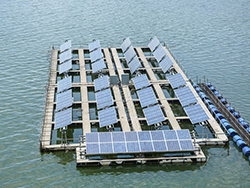 The Energy Policy Act of 2005 gave BOEM jurisdiction over projects that make alternate use of existing oil and natural gas platforms in Federal waters, in addition to jurisdiction over renewable energy projects.

Alternate uses of existing facilities may include, but are not limited to: