BOEM plans to hold the next Gulf of Maine Intergovernmental Renewable Energy Task Force meeting virtually on Thursday, May 19, 2022. Additional information and registration are available at Gulf of Maine. 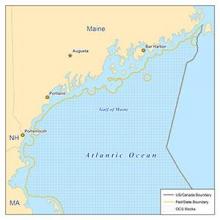 In January of 2019, Governor Christopher Sununu of the State of New Hampshire requested the establishment of an intergovernmental offshore wind renewable energy Task Force for the state. Given the regional nature of offshore wind energy development, BOEM has decided to establish a Gulf of Maine Task Force – including representation from New Hampshire, Massachusetts, Maine and federally recognized Tribes in the area.

The Outer Continental Shelf Lands Act requires BOEM to award renewable energy leases competitively, unless BOEM determines there is no competitive interest.  In October 2011, BOEM received an unsolicited request for a commercial lease from Statoil North America Inc. (Statoil NA).  BOEM reviewed the unsolicited lease application and determined that Statoil NA was legally, technically and financially qualified to hold a commercial lease on the Outer Continental Shelf. Click here for a map showing the area proposed by Statoil North America.

The next steps in BOEM’s renewable energy leasing process were to determine whether or not other companies were interested in developing the same area (i.e., to determine competitive interest) and to conduct an environmental review of the proposed project. So, on August 10, 2012, BOEM published the following public notices in the Federal Register:

On December 19, 2012, BOEM published a Notice of Determination of No Competitive Interest (DNCI) in the Federal Register (under Docket ID: BOEM-2012-0091), thereby announcing BOEM’s decision to proceed with a noncompetitive lease process for the proposed lease area offshore Maine. Since then, Statoil has withdrawn its lease request. There are no offshore renewable energy projects in Federal waters offshore Maine at this time.