What Is The Environmental Impact Statement (EIS) Process? 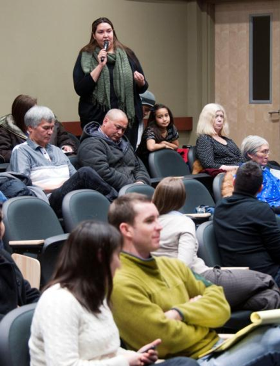 Scoping is the process used to determine the appropriate contents of an Environmental Impact Statement (EIS). Public participation is an integral part of scoping. The first scoping step is to announce to the public, by a Federal Register notice and press releases, that an EIS will be prepared and to ask for comments about what should be included. We may also hold one or more public meetings in communities that might be affected if leasing, exploration, or development were to occur. The purpose of soliciting input is to identify relevant issues, alternatives, mitigation measures, and analytical tools so that they can be incorporated into the EIS.

Getting input from as many affected and interested parties as possible is an important part of preparing an EIS. These usually include:

An important objective of scoping is to identify specific elements of the environment that might be affected if the proposal is carried out. If we determine that there might be significant impacts associated with a concern that is raised during scoping, it is analyzed in detail in the EIS. For OCS activities, environmental concerns that commonly arise include:

Based on the information received during the scoping effort and other information, such as the location of sensitive natural resources, estimates of oil and gas resources, or projected oil and gas activity, we identify alternatives to the proposal that might reduce possible impacts. In addition, any reasonable measures suggested to mitigate possible impacts are considered for analysis in the EIS.

The EIS analyzes the particular environmental concerns that were identified. A separate analysis is prepared for the proposal and each alternative. The objective of the analysis is to estimate the nature, severity, and duration of impacts that might occur and to compare the impacts of the proposal and alternatives. Numerous technical aids are used in making the assessment, including ecological and socioeconomic studies sponsored by BOEM and others, and computer models that simulate the movements of accidental oil spills or air emissions from operations.

The impact analysis is first documented in a draft EIS. When the Associate Director for Offshore Energy and Minerals Management, or a higher authority, approves an EIS, BOEM headquarters staff review a pre-publication version of the draft. If approval authority for the EIS is above the BOEM Director, the Department's Office of Environmental Policy and Compliance and the Solicitor's Office also review the draft. The purpose of the review is to ensure the technical accuracy of all aspects of the document.

The draft EIS is made available to the public for a minimum of 45 days for review and comment. The availability of the draft EIS is announced in a Federal Register notice and in press releases. Copies of the document are made available to the public through our web pages, individual mailings, and repositories such as public libraries. The public may either comment to us in writing or by making oral comments at one of the public hearings that we hold in the areas most likely to be affected.

The principal concern in developing the final EIS is to address public comments on the draft EIS in a responsive and responsible fashion. The final EIS includes a summary of all comments and our responses. The office preparing the EIS is responsible for drafting responses. For appropriate EISs, the Department and BOEM headquarters review them for technical accuracy and adherence to policy.