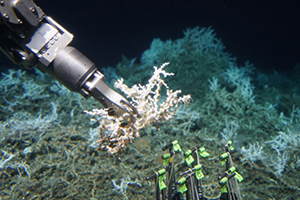 Alvin collects a sample of Lophelia pertusa from an
extensive mound of both dead and live coral.
Image copyright Woods Hole Oceanographic Institution.

On August 23 and 24, 2018, the DEEP SEARCH science team conducted two dives aboard the Alvin, a human occupied vehicle, or HOV, in an area approximately 160 miles southeast of Charleston, S.C. The team observed extensive reefs composed of the deep-sea stony coral, Lophelia pertusa.

When the lengths of all the mound and ridge features mapped in the region were combined, the DEEP SEARCH team estimated that there were approximately 85 linear miles of discontinuous Lophelia reef here.

The DEEP SEARCH team will spend the coming months and years fully characterizing the significance of these two dives and the extent and makeup of the reefs. The coral structures create complex habitats that are homes to diverse communities of invertebrates and fishes, making the reefs hotspots of biodiversity in the deep sea.

In May and June 2018, the NOAA Ship Okeanos Explorer conducted initial mapping and exploration of the U.S. southeastern continental margin during its Windows to the Deep 2018 expedition. The DEEP SEARCH mission is augmenting the mapping and exploration with the Alvin and its host vessel, the R/V Atlantis, which are owned by the U.S. Navy and operated by the Woods Hole Oceanographic Institution.

Share the excitement through the scientists’ interviews and keep up with the latest activities @ https://oceanexplorer.noaa.gov/explorations/18deepsearch/welcome.html.

Scientists shipped out of Woods Hole, Mass., for a two-week expedition to the U.S. mid- and south Atlantic coast on Aug. 19, 2018. This was the third field research mission for the DEEP SEARCH project sponsored by BOEM, USGS, and NOAA. Aboard the research vessel Atlantis, they are exploring deep-sea coral, canyon, and gas seep ecosystems. Fieldwork began in September 2017 under the National Oceanographic Partnership Program (NOPP).

Seven academic institutions, including Temple University, plus the USGS, and TDI Brooks International are collaborating on the project, which will shed light on little-known natural resources of the deep ocean off the United States’ southeast coast from Virginia to Georgia.

Deploying the manned deep-ocean research submersible Alvin, the scientists are collecting water, sediment, and benthic faunal samples, and imagery of benthic habitats. The research will increase our knowledge of U.S. continental margin geology, the types of communities found on the seafloor, and the mid-water communities that interact with those seafloor communities.

The September 2017 excursion included seafloor mapping and used the autonomous underwater vehicle Sentry offshore North Carolina, confirming the presence of chemosynthetic organisms at suspected seeps for the first time. The researchers noted large numbers of fish clustered around rocks within the same area. The August 2018 excursion will examine fish distribution to determine how different species respond to localized features.

BOEM, NOAA, and the USGS began planning the study in 2015. Coincidentally, it overlaps with BOEM’s proposed 2019–2024 National Oil and Gas Leasing Program, which may or may not result in Atlantic leasing. No decisions have been made, yet new information from this study could be useful in pre-leasing or post-leasing decisions, such as those affecting sensitive habitats that are the focus of this study. BOEM funds research like this to identify resources that must be protected should there be future energy activity off the coast.