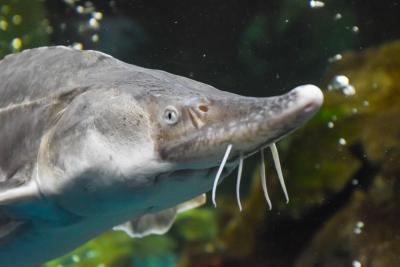 The ocean is a big place, right? Well, maybe not as large as it would seem, at least to the fish and wildlife that live there. BOEM scientists know this because of their efforts to share species data with other Federal agencies, which helps resource managers better understand where these animals occur in the ocean and how they may overlap with marine activities like sand dredging.

BOEM oversees and manages sand leasing from the Outer Continental Shelf for shore protection, beach nourishment and barrier island restoration. In 2020, sand dredged from a borrow area off Carteret County, N.C. was bound for the restoration and protection of Bogue Banks, a 21-mile barrier island. To help ensure that dredging operations don’t harm marine species, the dredging company hires fishing boats – typically carrying protected species observers – to use trawl nets to gather threatened or endangered species, like Atlantic sturgeon and sea turtles, and remove them from the area before and during dredging. BOEM may require these measures if they are deemed essential during consultations with the National Marine Fisheries Service, which is responsible for acting as the steward of protected marine species and their habitat.

Once collected, the animals are scanned for external flipper tags or internal Passive Integrated Transponders or PIT tags (similar to those used on household pets). The tags are unique to each individual animal so that scientists can track movement and growth. If the fish or sea turtles aren't already tagged, biologists give them a new tag and collect biological data and genetic samples before they are released.

Throughout the winter dredge project off North Carolina, six Atlantic sturgeon, which are protected under the Endangered Species Act due to overfishing and habitat loss, were collected.  Of these, two had been previously tagged by researchers.

Sturgeon No. 1 was originally tagged off Delaware in 2012 when it was 1.67 meters in length. When collected offshore North Carolina eight years later and more than 250 nautical miles away, it had grown to 2.18 meters. Less is known about Sturgeon No. 2, which was originally tagged in 2004 about 300 nautical miles away in the Altamaha River in Georgia. It had grown to 2.15 meters and was at least 16 years old.

The success of these tags relies on coordination among scientists, in this case BOEM and the U.S. Fish and Wildlife Service, so that both researchers and managers can better understand an animal’s age, growth rate, and where it goes and how far it travels.

If these particular sturgeon continue to migrate up and down the Atlantic Seaboard and into coastal rivers – as this species does – researchers may find them yet again; their species can live for 60 years and grow to more than 4 meters long.