A Love of the Sea Started Early for Dr. Ann Scarborough Bull 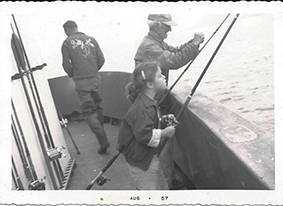 On an overcast day in southern California, a bright-eyed little girl embarked on a magical adventure that would shape the rest of her life. The curious four-year old accompanied her dad onboard what seemed to be a massive boat outfitted with lots of fishing gear and equipment. They were headed for the Point Loms Kelp Beds. As she watched the coastline recede, she could smell the ocean and feel bursts of sea mist spray her cheeks. She was the only child -- the only little girl -- on the boat. Taking her place beside her dad, she learned how to bait a hook, then threw her line in the water and waited. During the wait she was enamored with the abundance of sea life that came by the rocking vessel – kelp beds, pelicans, and sea lions, and dolphins. While she exclaimed with joy at the sight of each new “friend” her dad encouraged her observation of the watery zoo around her. Before long, the little girl’s pole began to tug downward. 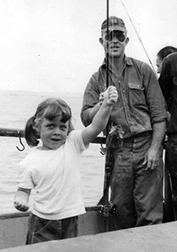 “Daddy, I got something!” she screamed with anticipation. As she purposefully reeled in her line with her dad’s help, she found her prize, a California rockfish. At that moment, the little girl her dad called "Annie Lynn" found her calling. 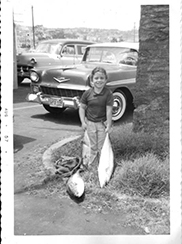 You might say the sea is in Ann Scarborough Bull’s blood. Since the tender age of four, when her father took her out on the trip aboard a commercial fishing vessel, she has been captivated by the ocean.

“We saw two Mola mola, as big and round as the dining room table back at my house,” she recalls. “They were sunning themselves at the surface as they floated the giant Pacific gyre -- back and forth, Japan to California to Japan to California. Nobody ate them, not even sharks. They were harmless sea monsters. So I wondered, ‘What other wonders were out there in that cold, blue, wet world?’ ”

Today the Southern California native is the Chief of Environmental Sciences for the BOEM Pacific Regional Office and a renowned marine biologist. She participates in field studies and leads the general direction for the bureau’s research program in the region. Her passion for the ocean and hard work brought her to the Department of the Interior 29 years ago.

Dr. Bull and her team collaborate with scientists from international and domestic academia, industry, private consultants, non-governmental organizations, and federal and state agencies. Her research interests focus on the ecological influence that offshore oil and gas platforms and renewable energy installations may exert on their environments at local and regional scales. Due to the burgeoning offshore renewable interests in the Pacific, her team is responding to a growing need for research on wind and wave energy.

She received her Bachelor’s degree in both biochemistry and biology from the University of California San Diego and went on to earn a Master’s and Ph.D. from Louisiana State University. She performed her graduate research at the Marine Biological Laboratory, Woods Hole. Her post-doctoral work at Johns Hopkins University centered on the health of fish populations and their responses to anthropogenic degradation of their environments.

“In 1976, I was given a gift for completing my Master’s Degree at Louisiana State University," said Dr. Bull. "That gift was a day of scuba diving aboard an offshore boat out of Cocodrie, Louisiana to dive around oil and gas platforms. I had done a lot of diving off of California, but never around an oil platform. Why do that?” she wondered. But it was a dive that opened a world of wonder. Life under the platforms was breaking all the classical zoological rules into a phenomenon of both temperate and tropical species, resident and transient species, open-ocean and coastal coral reef species in huge numbers. Yet no one was studying it. Over the years, she has been involved in conducting research that serves as the scientific underpinning for protecting the ocean while developing necessary sources of domestic offshore energy. 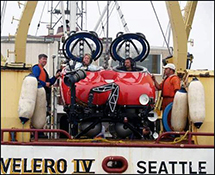 “Nothing is neutral,” she says. “Wherever and whatever, the human species does, including research, is going to have an effect. It could be big or small, positive or negative. Energy is important to civilization. Harvesting oceanic winds and waves is a no-brainer as is the need to produce some level of petroleum. We can do this. We can diversify and BOEM is the agency that can help do this.”

Her advice for other aspiring ocean scientists is simple. She urges students not to allow anyone to dampen their curiosity and passion for the ocean.

“I think people would be surprised by how many opportunities there are in federal service -- opportunities to serve, to make a difference, to travel, to design and do research science in near and far locations, to influence the way people think about offshore projects, to wrestle the truth from nature, to be over, on, and under the ocean, to say yes. There's always something and someone knocking on the opportunity door.” 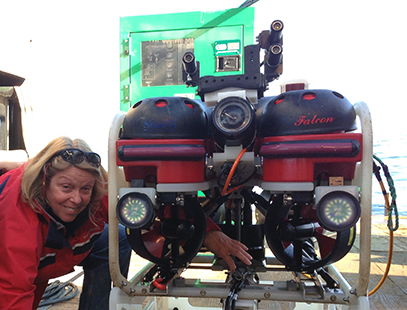 “It sounds cliché to say study math and science,” says Dr. Bull. "However, it is true, and students need to know how to write because writing skills are crucial. Everything from grant proposals to emails require being able to write well and in an active voice -- in plain English. It’s important to find analogies for science concepts and write to convey your stories.”