BOEM, Brevard County, Fla., And The U.S. Army Corps Of Engineers Sign Agreement To Use Federal Sand In Shore Protection And Restoration 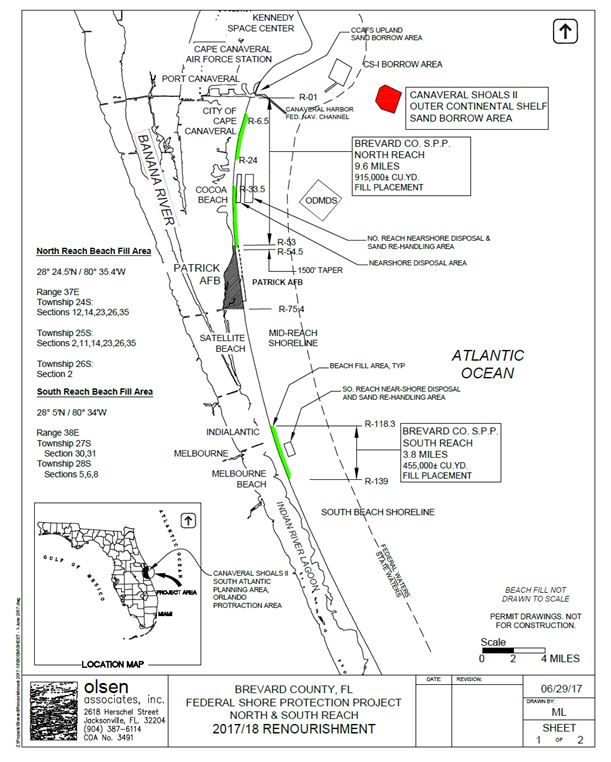 The Bureau of Ocean Energy Management (BOEM) has signed an agreement with Brevard County, Fla., and the U.S. Army Corps of Engineers Jacksonville District (Corps) authorizing the use of sand from federal waters for the Brevard County Shore Protection Project (North Reach and South Reach). Benefits from the beach nourishment are expected to reduce erosion resulting from Hurricane Matthew in October 2016.

BOEM is in contact with the Corps and Brevard County as they begin to assess impacts from Hurricane Irma, potential new OCS sand resource needs, and efforts to increase resilience of coastal communities.

BOEM is also participating in the broader Department of the Interior Federal Disaster Recovery Coordination effort for hurricanes Irma and Harvey as state, local, and federal agencies begin to assess the needs and response planning for natural and cultural resources and for infrastructure.

“BOEM stands with the citizens of Brevard County during this difficult period. As long-term partners with Brevard and many other Florida coastal communities, we are committed to providing offshore resources and working with these communities to restore the shoreline as soon as possible,” said Acting BOEM Director Walter Cruickshank. “We look forward to working with the Corps to proactively prepare and expedite similar projects in the future to meet coastal restoration needs in the wake of these massive storms.”

The current project is intended to restore the shoreline back to its designed level of storm protection that existed prior to the erosion from Hurricane Matthew. Benefits from the project include less damage to property and infrastructure caused by future storm-induced coastal erosion and to ensure the beach is suitable for recreation and wildlife habitat.

The project, which authorizes the use of 1.7 million cubic yards of sand from the seafloor of the federal Outer Continental Shelf (OCS) managed by BOEM, will renourish approximately 13.4 miles of two publicly accessible shoreline locations.

The sediment will be dredged from Canaveral Shoals Borrow Area II (“CS-II”), a borrow site approximately 9 to 21 nautical miles from the two placement areas. The North Reach (9.6 miles) extends from the Canaveral Harbor entrance south to the northern end of Patrick Air Force Base. The South Reach (3.8 miles) includes the towns of Indialantic and Melbourne Beach. Construction will occur within the appropriate environmental window to avoid impacts to nesting sea turtles.

“The partnership between Brevard County and BOEM, with the US Army Corps of Engineers, is critical to maintenance of our beaches” said Mike McGarry, Beaches, Boating and Waterways Program Manager for Brevard County. Virginia Barker, Director of Brevard County’s Natural Resources Management Department added, “We are pleased to continue this relationship that dates back to 2001 when Brevard signed its first lease in Florida to use sand from the OCS for the construction and renourishment of federal shore protection projects. This has been an important sand resource for us.”

The environmental impacts associated with dredging and placement of OCS sand resources along the Brevard County shoreline were evaluated in several analyses the Corps and BOEM prepared under the National Environmental Policy Act, or NEPA since 1996. For the 2017 renourishment project, BOEM took the lead in preparing a new Environmental Assessment (EA), which is available on the Marine Minerals Program Florida page, along with the Finding of No Significant Impact (FONSI).

BOEM is the only federal agency authorized under the Outer Continental Shelf Lands Act (OCSLA) to convey OCS sand resources for shore protection, beach or wetland restoration projects undertaken by a federal, state or local government. In exercising this authority, BOEM may issue a negotiated non-competitive lease for the use of OCS sand to a qualifying entity in response to a request.

BOEM has invested more than $40 million over the past 20 years to identify non-energy resources on the OCS, conduct world-class scientific research, and lease OCS resources to coastal communities and other Federal agencies in need. Information from environmental research and resource identification has informed decisions concerning the use of OCS sand resources in beach nourishment and coastal restoration.