Scientists beginning a new four-and-a-half year study of deep-sea coral, canyon, and gas seep ecosystems in the mid- and south Atlantic depart from Norfolk, Va., on September 12. The Bureau of Ocean Energy Management (BOEM), the United States Geological Survey (USGS), and the National Oceanic and Atmospheric Administration (NOAA) are collaborating on the study, which will shed light on little-known natural resources of the deep ocean off the United States’ Southeast coast. 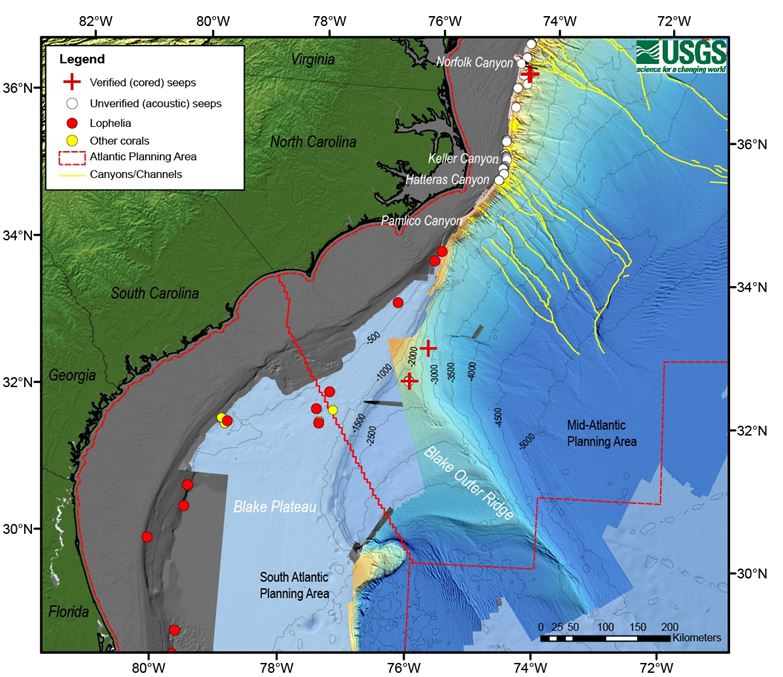 Map of target areas to be surveyed
during the first phase of the
Deepwater Atlantic Habitats II study,
DEEP SEARCH, including seep targets.
USGS image.

The research is organized through the National Oceanographic Partnership Program (NOPP), with TDI-Brooks International, Inc., as the prime contractor for BOEM, and scientists from USGS and seven academic institutions participating.

Traveling aboard the NOAA Ship Pisces, an interdisciplinary team of researchers will spend about three weeks at sea exploring geological processes and biological features—such as corals and naturally-occurring gas seeps, and the organisms that inhabit them—in deepwater habitats between 30 and 130 miles offshore North Carolina, South Carolina, and Georgia.

Support for the study is shared equally among the three federal agencies either in partner funding or in-kind support. BOEM developed the study concept, funded the competitive contract, and brought together scientific personnel, ships, and equipment from USGS and NOAA’s Office of Ocean Exploration and Research (OER). Temple University’s Erik Cordes is the project manager for TDI-Brooks International, Inc., and lead principal investigator for the multi-year study. Five USGS science teams, led by USGS scientist Amanda Demopoulos, representing various disciplines will collaborate with other partners and researchers from Temple University, the University of Georgia, Nova Southeastern University, Florida State University, Harvey Mudd College, the University of New Hampshire, and the Royal Netherlands Institute of Sea Research (NIOZ).

”This study brings together experts who will collaborate to improve our understanding of the distribution, ecology, and underlying geological foundation of sensitive deep-sea environments within this region,” said Demopoulos, who serves as the chief scientist for the first expedition and USGS’ project chief for the multi-year study. “The results will also yield insights into potential marine natural hazards such as landslides and tsunamis, which may have a future impact on sea floor and coastal infrastructure within the Atlantic region. Ultimately, the research will provide the essential baseline information needed to guide management of these deep-sea resources.”

This is the first of three planned collaborative deep-sea expeditions in the region over the next three years. The project will provide baseline information needed by each agency. BOEM will obtain new scientific data to inform environmental reviews and offshore energy decisions; USGS and NOAA will gain new scientific understanding of the region’s physical and biological resources.

”While BOEM has been planning this study since 2015, the timing overlaps with the recently announced 2019 – 2024 National Outer Continental Shelf Oil and Gas Leasing Program, which may or may not result in Atlantic leasing,” said BOEM Acting Director Walter Cruickshank. “No decisions have been made. However, new information from this study could be useful in pre-leasing or post-leasing decisions, such as those affecting sensitive habitats that are the focus of this study.”

“NOAA has a long-term interest in exploring and characterizing unknown and poorly understood areas of the global ocean,” said Dr. Alan Leonardi, Director of NOAA’s Office of Ocean Exploration and Research. “This study provides the opportunity for deep-water discoveries in the mid- and south Atlantic and will contribute the environmental information needed to address current and emerging science and management issues in the region.”

The upcoming expedition will survey Keller Canyon, Pamlico Canyon, Hatteras Canyon, and several unnamed canyons, seeps, and hardbottom features using the autonomous underwater vehicle (AUV) Sentry owned by the Woods Hole Oceanographic Institution. Researchers will use a variety of AUV sensors and ship-board instruments to characterize the surface and sub-surface of the sea floor and map it in high resolution. They will collect samples from the water column and seafloor sediment samples and create a database of the seafloor locations of deep-sea communities, including corals, sponges and organisms that inhabit gas seeps. The study will eventually encompass sites between Virginia and Georgia, with future expeditions planned for 2018 and 2019.

The media and public will be able to follow the mission, and obtain daily updates through the NOAA/OER website. The study’s acronym will be DEEP SEARCH, standing for Deep Sea Exploration and Research of Coral/Canyon/Seep Habitats.

The new project builds on partnerships from the award-winning Mid-Atlantic canyons study that took place from 2011 to 2015 under the NOPP. That study provided important new baseline information about deepwater habitats and species north of the current study’s operating area.

BOEM’s Environmental Studies Program develops, funds, and manages rigorous scientific research to inform policy decisions regarding the development of energy and mineral resources on the Outer Continental Shelf. Visit our new website, and join us on Facebook, Twitter and our other social media channels. Study reports covering more than 40 years and profiles are available through this link: https://www.boem.gov/Environmental-Studies-EnvData/.

USGS is a multi-disciplinary science organization providing reliable scientific information to describe and understand the Earth; minimize loss of life and property from natural disasters; manage water, biological, energy and mineral resources; and enhance and protect our quality of life. For more information on this expedition and other USGS deep-sea coral expeditions, visit the DISCOVRE web page.

NOAA's mission is to understand and predict changes in the Earth's environment, from the depths of the ocean to the surface of the sun, and to conserve and manage our coastal and marine resources. Join NOAA on Twitter, Facebook and their other social media channels. Visit their news release archive.