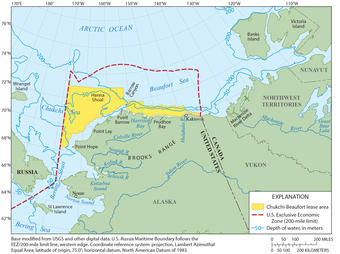 “Alaska’s rapidly changing climate is affecting the region’s ecology and economic opportunities in the Arctic,” said Lyman Thorsteinson, an emeritus scientist with the USGS. “The physical and biological qualities of hospitable marine habitats are developing in warming Arctic waters, and, with respect to human developments, previously ice-covered areas are opening and becoming accessible to new exploration.”

The research was conducted by investigators from the USGS and University of California Santa Barbara and summarizes what is known about the natural history of each species and explores the adaptations and limitations of fish populations to Arctic environments. This information will be useful in directing future research needs and informing natural resource managers about high-priority marine fish species.

Priority species include those that are used in subsistence activities or that are important to the functioning of marine ecosystems. For example, salmon, whitefish and char are valued subsistence resources and are seasonally important to the food security of many Alaska Native communities. Although of lesser subsistence value, the Arctic Cod is the most abundant marine fish in the Chukchi and Beaufort seas and is a major prey of birds and marine mammals in the region. Regional food webs are short and the Arctic Cod, a mid-level consumer, is considered a keystone species because it provides a major energy link between zooplankton and higher-level consumers. Arctic Sand Lance and Pacific Capelin are other important forage species.

Arctic Cod, a small, ice-affiliated forage fish, is the
most abundant marine fish and is an important link in
marine food webs. Photo by Catherine Meckleburg,
2007.

Given the Arctic Cod’s food web significance, a novel spatial analysis was used to investigate climate warming effects on this species and a major competitor, the Saffron Cod. The analysis suggests likely northerly shifts in the distributions of both species and varying population effects. For Saffron Cod the potential distributional shift would represent an expansion in geographic range; the Arctic Cod, meanwhile, would experience a constriction.

The report also documents colloquial Iñupiat names for the marine fish species used by indigenous peoples. It is hoped that this common vocabulary can facilitate future exchanges of ideas and knowledge across disciplinary boundaries in support of the sustainability goals established by Arctic communities and managers of marine ecosystems.

The report, “Alaska Arctic Marine Fish Ecology Catalog: Beaufort and Chukchi Seas,” is a major synthesis and compendium of biological information about the marine fishes occurring in the U.S. Arctic. The study focuses on new information collected since the publication of the “Fishes of Alaska” in 2002.

“Emphasis on biological and ecological research objectives distinguishes this research from other zoogeographic studies which tend to be more focused on taxonomy, distribution and species identification,” said Thorsteinson. “It’s an important reference for those interested in Arctic fishes, as it includes a description of the marine environment, confirmed species from the region, and how these fish populations have adapted, and are limited by, but are resilient to, cold temperatures and ice-covered environments characteristic of the region. Because the population dynamics of these species are largely unknown, existing information about the life history traits of species, and groups of species, are currently important for their management and Arctic policymaking.”