Since 1998, geoscientists at the Bureau of Ocean Energy Management (BOEM) have identified and mapped nearly 37,000 water bottom (seafloor) acoustic amplitude anomalies in the deep water northern Gulf of Mexico (GOM) using 3-D time-migrated seismic surveys. The purpose of this mapping program is to understand the distribution of natural hydrocarbon seeps and related benthic fauna (chemosynthetic and coral communities) in the GOM, and to characterize other seafloor features related to the geological framework of the seafloor. These areas show anomalously high or low acoustic amplitude response relative to typical background, with most areas having overlapping seismic coverage by two or more surveys. These results cover over 230,000 square kilometers of seismic data interpretation.

The water bottom horizon was mapped over these surveys using hand-interpreted seed-lines and Schlumberger’s geophysical interpretation software GeoFrame’s automatic picking function to fill the gaps between. Next, the water bottom’s acoustic amplitude was extracted and displayed in plan view. Boundary polygons were drawn around areas with anomalously high-positive and low-positive amplitudes, as well as negative amplitudes (complete phase-reversal of the water bottom horizon). The amplitude maps were cross-checked with vertical seismic profiles to verify correctness in the autopicked interpretation. In vertical 3-D seismic profiles beneath most of the amplitude anomalies, blanking and/or visible fluid-migration pathways (e.g., vertical gas “chimneys” and faults) are often visible in the subsurface up to the water bottom. As through December 2016, BOEM, NOAA, industry contractors, and others have confirmed hundreds of the anomalies as hydrocarbon seeps and carbonate hard grounds through utilization of submersible, ROV, AUV, camera sled surveys, piston cores, trawls, and multibeam sonar identifying water column gas plumes. Figure 1 illustrates the total distribution of all 23 types of anomaly, however, not all anomalies nor anomaly types are visible in Figure 1 due to its scale and resolution. You will need to download the anomaly files to properly view all mapped features.

There are four classes of waterbottom anomalies interpreted to be caused by hydrocarbon seepage: 1) High-Positive, 2) Low-Positive/Negative, 3) Pockmarks, and 4) Water-Column Gas Plumes. What do we mean when we say high-positive, low-positive, and negative? Please see Figure 1A for a visual explanation. 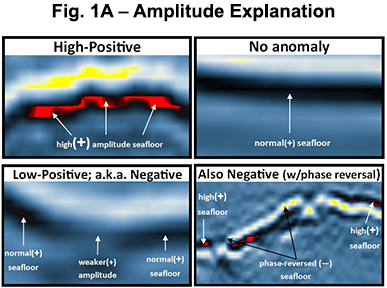 The anomalies described below are non-seep related, and with the exception of the two Cretaceous types, all are not likely to support benthic organisms. 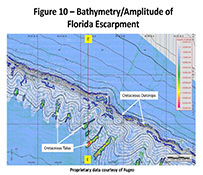 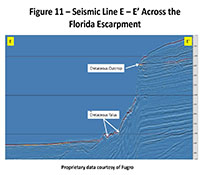 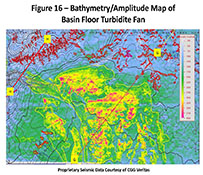 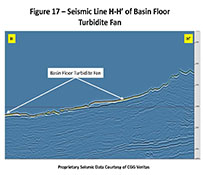 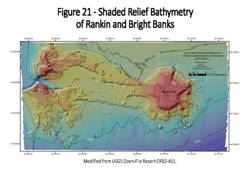 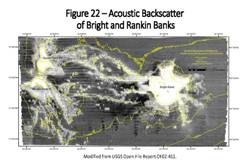 These files were generated using ESRI® ArcGIS ArcMap™ 10.5 in a Microsoft® Windows® 10 operating system, and have been tested to be backwards compatible through version 9.3.1.

File formats: For your convenience, the anomaly files have been provided in Layer Package Format (.lpk), which is similar to a zipped folder. The single file contains all 23 anomaly types, metadata, coordinate information, and visual symbology. Alternatively, if you would rather download each type of anomaly individually, you may do so with the individual zipped folders below. The individual zipped folders contain the standard shapefile suite of files (.shp, .dbf, .prj, etc.) and also a layer file (.lyr) which contains the visual attributes and descriptions of each shapefile. We have also made .DWG files available for CAD users. The DWG files are in R2010 format.

Instructions to View the Anomaly Polygons:

NOTE: Methods 1 and 2 below are totally dependent on the internal settings of your ArcGIS File Handler application, commonly located at C:\Program Files (x86)\Common Files\ArcGIS\bin\ArcGISFileHandler.exe. Launch your ArcGISFileHandler to specify where and how GIS data packages are extracted if you encounter errors opening these files.

Method 3: (not recommended) Loading individual shapefiles instead of the Layer Package file

When initially loading the Layer Package file to your project, please use patience. There are over 32,000 polygons in the files, so they may take up to a few minutes to load in to your project. Your project may freeze temporarily while the file is being unpacked.

If using any other GIS software

You can assist in making this database more complete!

A significant limiting element in this dataset is our lack of knowledge of all the sites in the Gulf of Mexico that have been confirmed by direct observations. Should you discover through your use of these files, that you may have evidence to confirm the presence or absence of chemosynthetic and/or coral communities, hydrates, oil & gas seeps, etc., BOEM asks that you to contact via email william.shedd@boem.gov or pierre.abadie@boem.gov with lat/longs, maps, photos/videos, etc., so we can update our database for the benefit of all using this resource. This website will be referencing the source of these confirmations known to date and will give credit to all who contribute information in the future.

BOEM wants to thank the following companies for allowing the use of their data in generating and publishing these derivative interpretations: