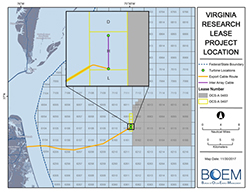 In 2020, installation was completed on the first wind turbines installed in U.S. Federal waters. The offshore wind project has been fully operational since Fall 2020.

The Coastal Virginia Offshore Wind pilot project is designed to demonstrate a grid-connected, 12-megawatt (MW) offshore wind test facility on the Outer Continental Shelf (OCS) about 27 miles off the coast of Virginia Beach. The data obtained and lessons learned from this project will be made publicly available and inform the future production of renewable energy within the adjacent commercial lease area.

The site is leased by the Commonwealth of Virginia’s Department of Mines Minerals and Energy (DMME). Dominion Energy was designated  as the lease operator and has contracted with Ørsted Energy to construct the two turbines and has selected L.E. Myers Company to perform onshore electrical design and construction.

On September 7, 2017, Dominion Energy retained Ørsted as the Engineering, Procurement and Construction (EPC) contractor for the project. The EPC determined that due to advances in technology since the project's approval in March 2016, several revisions to the RAP were warranted. On December 28, 2017, Dominion submitted a RAP Revision (RAPR) for BOEM's review. In addition to submitting the RAPR, Dominion changed the project name from “VOWTAP” to the “Coastal Virginia Offshore Wind Project.”

As part of BOEM's review of the RAPR, it determined that its existing environmental analyses of the original RAP and site assessment activities in the area adequately assessed the environmental effects of the proposed action and reasonable alternatives of the revisions to the RAP.

In June 2019, BOEM announced the approval of the Research Activities Plan revision (RAPR) for the Coastal Virginia Offshore Wind (CVOW) Project. The Bureau’s approval of the RAPR represented the final major approval needed to begin construction of the two-turbine project.

In February 2013, DMME submitted a research lease application to BOEM for the installation and operation of two 6-megawatt (MW) turbines, ancillary metocean facilities, a meteorological tower and buoy, and installation of associated cabling to shore.

In July 2013, BOEM published a "Public Notice of an Unsolicited Request for an OCS Research Lease, Request for Competitive Interest, and Request for Public Comment" in the Federal Register to obtain public input on the research proposal received from DMME, its potential environmental consequences, and the use of the area in which the proposed project would be located.

BOEM also asked whether there were other entities interested in obtaining a renewable energy lease of the same scale within the same area identified by DMME that would support potential wind energy development. The notice described potential leasing in six sub-blocks on the western edge of the Virginia Wind Energy Area (WEA). Materials related to the RFCI are below:

The public comment period in response to the Federal Register Notice closed on August 29, 2013. BOEM received five comments, which are available here. Accordingly, BOEM published a “Determination of No Competitive Interest ” in the Federal Register in December 2013 to announce it will proceed with the leasing process on a non-competitive basis.

The decision cleared the way for DMME to submit a plan for renewable research activities for which BOEM prepared a project-specific environmental review.

A Research Activities Plan (RAP) was submitted by DMME to BOEM in December 2013 for the Virginia Offshore Wind Technology Assessment Project (VOWTAP). The plan was revised through April 2015 and detailed the proposed location and schedule and includes resource and assessment information and data collected to date in support of the planned design, construction, installation operation and maintenance of two 6-MW turbines offshore Virginia. The plan also provides information related to the installation of approximately 27 nautical miles of submarine transmission cable as well as other ancillary facilities and improvements to terrestrial substations required to support the project.

In December 2014, BOEM announced the publication of its EA for public comment. BOEM considered all comments received and, in September 2015, made available a revised EA for the VOWTAP. As a result of the analysis in the revised EA, BOEM issued a “Finding of No Significant Impact” (FONSI), which concluded that reasonably foreseeable environmental consequences associated with the project would not significantly impact the environment. For more information, click on the links below.

In March 2016, BOEM announced it approved the RAP for the first wind energy research lease in U.S. federal waters. The RAP was developed by DMME’s Operator Virginia Electric and Power Company (dba Dominion) and described the proposed construction, operation, maintenance, and eventual decommissioning of VOWTAP. For more information, click on the link below.

Click on the links below to view the executed lease and DMME’s designation of Dominion Energy as lease operator.