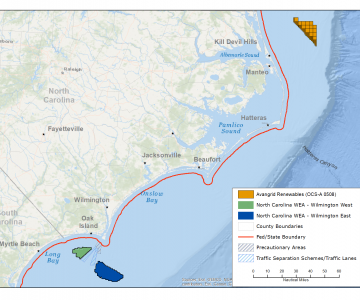 On May 11, 2022, BOEM held an offshore wind auction for two lease areas in the Carolina Long Bay. The lease sale drew competitive winning bids from two companies totaling approximately $315 million. To see the results of the auction, go to: https://www.boem.gov/renewable-energy/state-activities/carolina-long-bay.

Dec. 13, 2012: BOEM published a Call for Information and Nominations (or “Call”) in the Federal Register (under Docket ID: BOEM-2012-0088) for a 45-day public comments period to gauge the offshore wind industry's interest in acquiring commercial wind leases in three areas offshore North Carolina and to request comments regarding site conditions, resources and other uses within the Call areas.

Dec. 13, 2012: In addition to the Call, BOEM published in the Federal Register a “Notice of Intent (NOI) to Prepare an Environmental Assessment (EA)” (under Docket ID: BOEM-2012-0090). BOEM extended the public comment period until Mar. 7, 2013. The EA considered potential environmental and socioeconomic impacts associated with issuing commercial wind leases and approving site assessment activities on the lease areas.

Jan 23, 2015: BOEM published the EA for public review and comment. BOEM carefully considered all comments received and, on September 17, 2015, made available a revised EA for the WEAs offshore North Carolina. As a result of the analysis in the revised EA, BOEM issued a "Finding of No Significant Impact" (FONSI), which concluded that reasonably foreseeable environmental effects associated with the commercial wind lease issuance and related activities would not significantly impact the environment. For more information, click on the links below:

Mar. 25, 2022: BOEM completed its final Supplemental Environmental Assessment (SEA) of potential impacts from the issuance of commercial wind energy leasing activities offshore North Carolina. The final SEA assesses potential impacts from the issuance of leases in the Wilmington East (now Carolina Long Bay) WEA. Potential impacts include those that could occur from site characterization activities (i.e., shallow hazards, geological, geotechnical, archeological, and biological surveys of the lease area and potential cable routes) and site assessment activities (i.e., installation and operation of meteorological buoys) associated with issuing wind energy leases in the WEA. Based on the analysis in the final SEA, BOEM has issued a finding of no significant impact.

For additional information about the WEAs offshore North Carolina, click on the link below.

Jan. 17, 2017: BOEM announced the publication of the Final Sale Notice (FSN) for a lease sale offshore North Carolina. The lease area is located 24 nautical miles (nm) from shore and extends 25.7 nm in a general southeast direction. Its seaward extent ranges from 13.5 nm in the north to 0.6 nm in the south. It contains approximately 21.5 Outer Continental Shelf (OCS) blocks (122,405 acres).

A summary of the bidding results can be found through this link: https://www.boem.gov/ATLW-7-NC/.

A summary of the bidding results can be found through this link: https://www.boem.gov/renewable-energy/state-activities/round-round-atlw-9-carolina-long-bay