The purpose of the study Realtime Opportunity for Development Environmental Observations (RODEO) is to make direct, real-time measurements of the nature, intensity, and duration of potential stressors during the construction and initial operations of selected offshore wind facilities. The purpose also includes recording direct observations during the testing of different types of equipment that may be used during future offshore development to measure or monitor activities and their impact producing factors.

Data collected under RODEO may be used as input to analyses or models to predict effects from future offshore wind farm construction and operation activities.  However, these efforts will not duplicate or substitute for any monitoring that may otherwise be required to be conducted by the developers of the projects.  RODEO monitoring is coordinated with the industry and is not intended to interfere with or result in delay of industry activities.

Monitoring was conducted at BIWF during the installation of the wind turbine foundations in the summer and fall of 2015 for near- and far-field underwater sound. Results from data analyses show that pile driving sound was above background sound levels at ranges in excess of 20 km (12.4 mi).

Because the piles were installed at an angle, the sound varied by 10 decibals depending on the location. Read more about the observations here: Field Observations during Wind Turbine Foundation Installation at the Block Island Wind Farm, Rhode Island

Underwater acoustic signals were measured during winter (20 December 2016 to 7 January 2017) and late summer (2 October to 3 November 2017) conditions. In addition, extended underwater acoustic monitoring also was conducted over 100 days during summer 2017 (15 July to 24 October 2017). Underwater sound at 50 meters from the turbine were near background levels and often not measurable due to other natural and anthropogenic noise (waves or boat sounds). Read more about the results here: Field Observations During Wind Turbine Operations at the Block Island Wind Farm, Rhode Island

Particle motion was measured during pile driving using a sled with hydrophones positioned in a tetrahedral configuration. Results from acoustic monitoring during pile driving indicated that at 500 m from the foundation, fish would likely be able to detect particle velocities in the frequency range of 30-300 Hertz and that this was more pronounced on the seabed than in the water column. Sound pressure levels at 500 m did not exceed ANSI-accredited injury thresholds. However, behavioral thresholds for fish were exceeded within 500 m of the foundations but not at stations 20 km and 30 km from the foundations. Read more about particle motion here: Underwater Acoustic Monitoring Data Analyses for the Block Island Wind Farm, Rhode Island

On the left, an underwater photograph of the tetrahedral array of hydrophones on the geophysical sled 500 m from WTG#3 and #4. The SPL peak-to-peak measured at this site was 194 dB re 1 mPa. Assuming spherical spreading, source level is about 248 dB re 1 mPa at 1 m.

An export cable was installed between the mainland of Rhode Island and Block Island. Approximately 20 miles of cable was layed over 24 days in June of 2016. Suspended sediment and sediment deposition from cable laying averaged around 1mg/l at the surface to < 9mg/l on the seafloor for suspended sediment. Deposition was observed up to 3.8 m from the trench with an average thickness of 7 cm. Read more about the results here: Observing Cable Laying and Particle Settlement During the Construction of the Block Island Wind Farm

Two scour monitors were installed on Turbine #3 and in place for 16 months. Data was continuously collected for the time period. The seafloor was observed to fluctuate in level by several centimeters which correlated with storm conditions. Read more about the results in: Field Observations during Wind Turbine Foundation Installation at the Block Island Wind Farm, Rhode Island

Seafloor disturbance and recovery monitoring was conducted in and around the Block Island Wind Farm (BIWF) to assess the impact of wind farm construction activities on the seafloor. Previous studies from Europe have shown that introduction of solid structures onto the seafloor, such as the four-legged BIWF turbine jacket foundations, can modify near-bottom current flow processes and induce scour. Five rounds of seafloor bathymetry surveys were conducted within a defined construction Work Area from a small research vessel using a Reson SeaBat 7125 ultra-high-resolution multibeam echosounder. Seafloor bathymetry data from the first and second surveys were primarily used to characterize the different types of seafloor disturbance features that resulted from construction activities. Data from the three rounds of post-construction surveys were used to evaluate the rate of seafloor recovery. Read more about the results in: Seafloor disturbance and Recovery Monitoring at the Block Island Wind Farm, Rhode Island - Summary Report 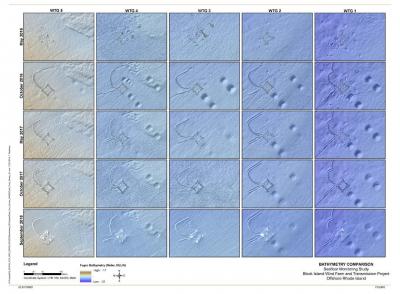 Studies looking at benthic changes at BIWF found that the changes occurred along a geospatial gradient ranging from minimal changes to transitioning to habitat with entirely different characteristics than existed prior to construction. The transformed habitat was characterized by dense mussels, high organic content, and fine sediment. However, the study also showed that benthic changes may be highly site-specific even within a single wind facility. Read more about the results here: Benthic and Epifaunal Monitoring During Wind Turbine Installation and Operation at the Block Island Wind Farm, Rhode Island – Project Report 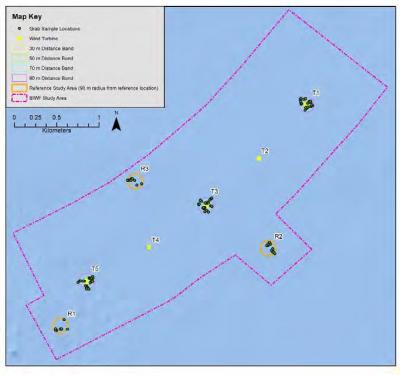 From the moment the turbines were installed, marine life began to cover the hard surfaces. Primarily, the inhabitants are mussels, but many other sea creatures are making their home on the turbines including sea stars and anemones. Watch the video.

Fish around the Turbines

While the divers were exploring the marine life attached to the turbine structure, they also ventured away to see the fish. Watch the video.

In addition to collaboration with ocean users in the siting of the facility, the BIWF has also provided the opportunity to study the impacts of offshore wind development to fishery resources. Observations were made through BOEM and developer-funded studies before and during the installation of the foundations, turbines, and during early operations. Interestingly, the studies at BIWF showed that some concrete cable protection measures did not provide niches for attaching epifauna and epiflora and thus provide no habitat benefit. Lastly, studies of flatfish occurrence at BIWF found spatial and temporal variation in abundance, size, and condition, but this variation was not consistent with either positive or negative effects of wind farm construction or operation. Lower winter flounder abundances during the pile-driving time period and higher abundances during the cable-laying time period in the reference and wind farm areas suggest regionwide population fluctuations occurred. Although noise from pile driving may have been detectable in the reference areas, other flatfish abundances were not lower during this time period. Although no artificial reef effect was found for flatfish, negative impacts from construction activity and wind farm operation also were not evident (reference to Wilber et al 2018 Journal of Sea Research).