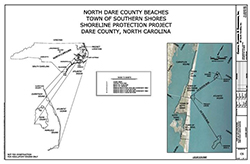 With the approaching summer season, we wanted to let you know that BOEM will aid Dare County, North Carolina, in rebuilding its coastal shoreline in several locations over coming months

The Town of Southern Shores plans to conduct a small beach nourishment project at the southern portion of the town in late May, rebuilding about 2,500 feet of shoreline. The project has been incorporated into the agreement that BOEM and Dare County signed in September 2016, adding 120,000 cubic yards of offshore sand for Southern Shores coastal restoration. Hurricane Matthew caused severe coastal erosion to the Town of Southern Shores in October 2016. Completion is expected in August.

The September agreement also authorized 4.825 million cubic yards of offshore sand to restore eight miles of Atlantic shoreline for the Towns of Duck, Kitty Hawk, and Kill Devil Hills. The increase for Southern Shores brings the new total to 4.945 million cubic yards of offshore sand resources for these projects from federal waters managed by BOEM. 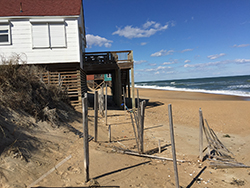 The projects for Duck, Kitty Hawk and Kill Devil Hills are also scheduled for this summer, giving Southern Shores the opportunity to leverage the significant cost savings from the previously planned construction.

BOEM coordinated with the US Army Corps of Engineers (USACE) and the North Carolina Division of Coastal Management for the beach nourishment. To meet its environmental stewardship responsibilities, BOEM, in partnership with the USACE, the county and the towns, previously prepared separate National Environmental Policy Act (NEPA) analyses for each project.

The sand, a federal resource located on the outer continental shelf (OCS), will be removed from two borrow areas about five miles offshore. BOEM has the authority to convey sand resources from the OCS without charge for shore protection and beach or wetland restoration projects undertaken by a federal, state or local government. In exercising this authority, BOEM may issue a negotiated non-competitive lease for the use of OCS sand to a qualifying entity.

BOEM has invested more than $40 million over the past 20 years to identify non-energy resources on the OCS, conduct world-class scientific research, and lease OCS resources to coastal communities and other federal agencies in need. Information from environmental research and resource identification has informed environmental assessment and leasing decisions concerning the use of OCS sand resources in beach nourishment and coastal restoration.