The Bureau of Ocean Energy Management (BOEM) has signed an agreement authorizing the U.S. Army Corps of Engineers, Charleston District (USACE), and Horry County, South Carolina, to use up to one million cubic yards of sand from federal waters to renourish the Garden City and Surfside Beach areas of Horry and Georgetown Counties. The project area, known as Reach 3, is part of the Myrtle Beach Federal Shore Protection Project. BOEM and partners expect construction to begin in late 2016. 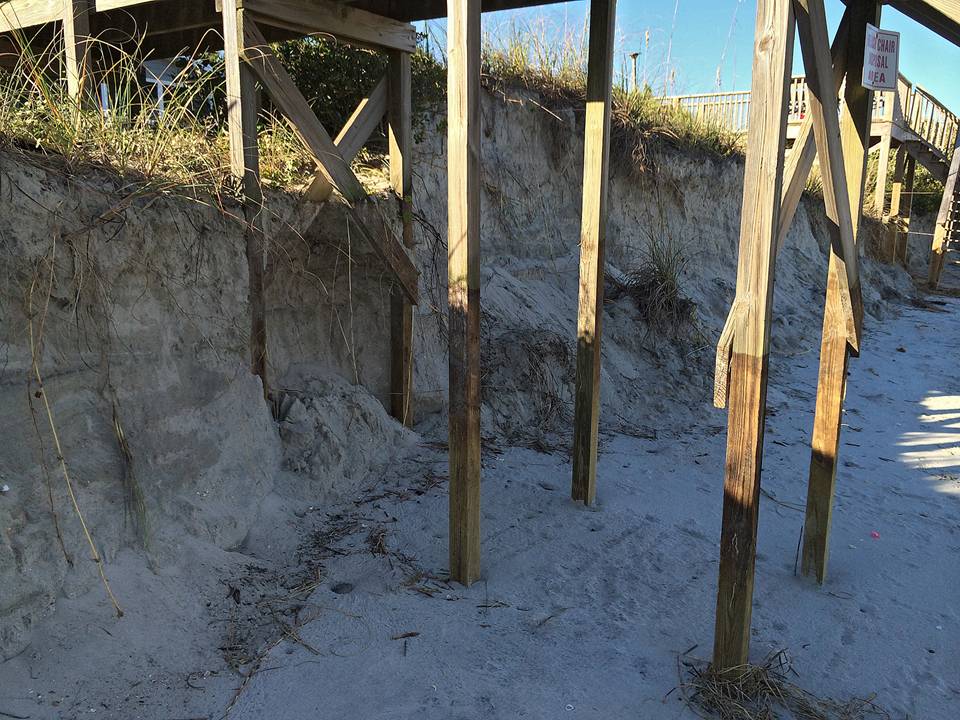 South Carolina experienced historic flooding from October 1-5, 2015, caused by a combination of Hurricane Joaquin and a front that resulted in intense wave activity and historic rainfall. The erosion worsened as a result of strong king tides, which occur when the moon is closest to the earth and generate a stronger gravitational pull. Subsequently, the state experienced severe inland and coastal flooding and coastal erosion, including 70 percent dune loss at Reach 3.

“Shore protection and healthy beaches are not only important to our quality of life, but also protect people and property along our coast from hurricanes and coastal storms,” stated Chris Eldridge, Horry County Administrator. “We value our partnership with BOEM and the U.S. Army Corps of Engineers, and are excited the Corps will begin the renourishment process for Reach 3 in a couple of months and will wrap up prior to next year’s summer and hurricane season.”

Reach 3 totals approximately 7.7 miles of shoreline. The sediment will be dredged from portions of the previously used Surfside Borrow Area that is located in federal waters, approximately three to five nautical miles offshore, under BOEM jurisdiction. Portions of it have been used in the past for the 1998 and late 2007/early 2008 nourishment projects. The previously dredged portion of the borrow area has recharged, or regained beach compatible material, through natural sediment transport processes. 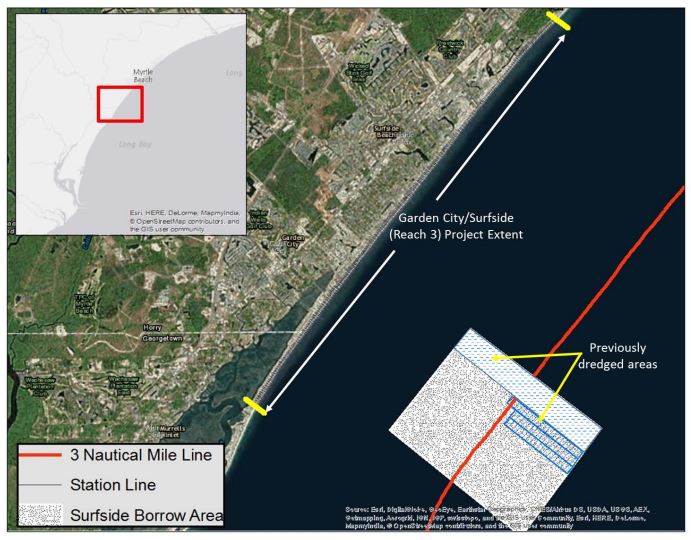 The project will extend from 1.2 miles south of the Horry/Georgetown County line up to Myrtle Beach State Park in Horry County. It is authorized under the Water Resources Development Act of 1990 (WRDA), as a federal shore protection project, facilitating the stabilization and restoration of the proper ecological function of the shoreline along the Grand Strand.

Nourishing the beach will meet several shore protection goals including protecting the Grand Strand, the state’s top tourist destination with about 17 million visitors per year. It will protect valuable public infrastructure such as evacuation routes and utilities, will reduce flooding of roads and homes behind the shoreface, and help first-responders react during emergency situations.

“The Charleston District is proud to continue protecting infrastructure along the South Carolina coastline through this beach renourishment,” said Lt. Col. Matthew Luzzatto, Charleston District commander. “This project is a great example of our partnerships with local and federal agencies to ensure the safety of people and property in our state.”

BOEM has the authority to convey OCS sand resources for shore protection, beach or wetland restoration projects undertaken by a federal, state or local government. In exercising this authority, BOEM may issue a negotiated non-competitive lease for the use of OCS sand to a qualifying entity.

BOEM has invested more than $40 million over the past 20 years to identify non-energy resources on the OCS, conduct world-class scientific research, and lease OCS resources to coastal communities and other Federal agencies in need. Information from environmental research and resource identification has informed environmental assessment and leasing decisions concerning the use of OCS sand resources in beach nourishment and coastal restoration.