The Bureau of Ocean Energy Management (BOEM) has signed an agreement with Martin County, Florida, and the U.S. Army Corps of Engineers Jacksonville District (Corps) authorizing the use of sand from federal waters as part of a hurricane and storm damage reduction project for Hutchinson Island, Martin County, Fla. Benefits from the beach nourishment are expected to reduce erosion along Hutchinson Island, and restore the beach profile following damages from Hurricane Matthew in October 2016. The restoration will also increase recreational opportunities, and restore habitat for nesting sea turtles and shorebirds. 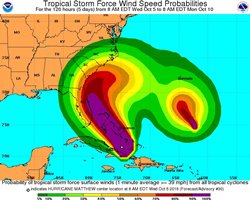 The project, using sand from the seafloor of the federal Outer Continental Shelf (OCS) managed by BOEM, will renourish a four-mile stretch of shoreline on Hutchinson Island using a sea turtle friendly beach design. The agreement authorizes up to one million cubic yards of sand.

Hutchinson Island is separated from mainland Florida by the Indian River Lagoon on the north, and the Ft. Pierce and St. Lucie Inlets on the south. The project will use sand from within a shoal complex (C1-B) located approximately seven miles offshore southeast Martin County. Construction will occur within the window from November 1, 2017 to May 1, 2018, to avoid impacts to nesting sea turtles.

“BOEM is pleased to support Martin County in this project, knowing how important the barrier island is not only to the people who live and visit there, but also various birds and animals, including sea turtles, that depend on a healthy habitat,” said BOEM Acting Director Walter Cruickshank.

"This project would not be possible without the partnership and collaboration with BOEM and Martin County,” said Lacy Pfaff, USACE Jacksonville district project manager. “The Martin County Shore Protection Project will be one of the first projects utilizing Flood Control and Coastal Emergency Act funds to repair damages from Hurricane Matthew. The offshore sand will be placed along the shoreline to replenish up to four miles of public beach in Martin County and bring the beaches up to the design level of protection to safeguard the area from future storms."

The environmental impacts associated with dredging and placement of OCS sand resources along the Hutchinson Island shoreline are evaluated in several documents prepared under the National Environmental Policy Act, or NEPA. A Supplemental Environmental Impact Statement (SEIS) was prepared in 2011 by the Corps with BOEM as a cooperating agency, and has already been used once for the Martin County Shore Protection Project constructed in 2013. The analysis included BOEM’s authorization to use OCS sand resources from the C1-B borrow area for future nourishments through 2046. BOEM has reviewed all prior NEPA documents and independently determined that existing environmental analyses adequately assess impacts. A new Record of Decision for the current project is available on the Marine Minerals Program Florida page.

BOEM is the only federal agency authorized under the Outer Continental Shelf Lands Act (OCSLA) to convey OCS sand resources for shore protection, beach or wetland restoration projects undertaken by a federal, state or local government. In exercising this authority, BOEM may issue a negotiated non-competitive lease for the use of OCS sand to a qualifying entity in response to a request.

BOEM has invested more than $40 million over the past 20 years to identify non-energy resources on the OCS, conduct world-class scientific research, and lease OCS resources to coastal communities and other Federal agencies in need. Information from environmental research and resource identification has informed environmental assessment and leasing decisions concerning the use of OCS sand resources in beach nourishment and coastal restoration.