Interior’s Bureau of Ocean Energy Management and Carteret County, North Carolina, have signed an agreement to provide up to two million cubic yards of sand from federal waters for the towns of Emerald Isle, Indian Beach, and unincorporated Salter Path. The project is part of the county’s fifty-year Bogue Banks Master Beach and Inlet Management Plan. BOEM and the county modified an existing planned agreement for a nourishment project on Bogue Banks set for the winter of 2018-2019 to include the impacts of Hurricane Florence, which hit the state in September 2018. 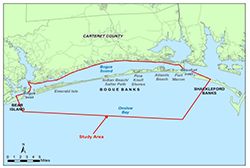 “BOEM stands ready to assist coastal communities whose beaches experience erosion from storms such as Hurricane Florence. We know how important these beaches are to the local economy,” said BOEM Acting Director Walter Cruickshank.

BOEM has the authority to convey OCS sand resources for shore protection and beach or wetland restoration projects undertaken by a federal, state or local government. In exercising this authority, BOEM may issue a negotiated non-competitive agreement for the use of OCS sand to a qualifying entity.

BOEM has invested more than $40 million over the past 25 years to identify non-energy resources on the OCS, conduct world-class scientific research, and lease OCS resources to coastal communities and other federal agencies in need. Information from environmental research and resource identification has informed environmental assessment and leasing decisions concerning the use of OCS sand resources in beach nourishment and coastal restoration.

“Hurricane Florence was the storm of record for Carteret County and the beaches are our main flood defense and the linchpin of our tourism economy,” said Greg “Rudi” Rudolph, Carteret County Shore Protection Manager. “It was fortuitous we were already working with BOEM to secure a sand and gravel lease for a beach nourishment project. We were able to modify our plans in short order, and now look forward to the start of construction of this very important project this spring.”

This project will return material to the nearshore system that was previously removed from the harbor navigation channel during channel maintenance dredging. It will help address sand deficits caused by erosion and storms such as Hurricane Florence, fortify the coast against future storm impacts, and restore habitat for shorebirds and nesting sea turtles.

To meet its stewardship responsibilities, BOEM, in partnership with the U.S. Army Corps of Engineers (USACE), analyzed impacts in an Environmental Impact Statement (EIS) prepared by a third-party contractor for the county in accordance with the National Environmental Policy Act (NEPA). BOEM and USACE completed all necessary consultations for the project, including those relating to endangered species, essential fish habitat, and the National Historic Preservation Act. The county secured a Coastal Zone Management consistency determination, among other state and federal permits. The final EIS and related documents are available on BOEM’s Marine Minerals Program North Carolina project page.