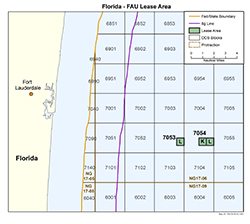 In April 2012, BOEM published an EA for a 30-day public review period. The EA considered potential environmental impacts and socioeconomic effects from issuing a lease and associated activities, including surveys, installing mooring and telemetry buoys, and testing of equipment designed to use the Florida current to generate electricity. Below are documents related to the April 2012 EA.

After the comment period closed on the April 2012 EA, FAU SNMREC changed the scope of their proposed activities. BOEM considered the public comments, as well as potential impacts from the newly proposed activities and additional research findings, and decided to revise the EA. One revision included a new preferred alternative, Alternative C – Removal of Aliquot Containing High Slope Hard Bottom Area, which was added to avoid a potentially biologically sensitive area when conducting lease activities.

To address public comments and consider additional activities associated with the proposed action, BOEM published a revised EA and its Finding of No Significant Impact (FONSI).

BOEM executed an Interim Policy lease with FAU Board of Trustees, effective on June 1, 2014. The executed lease and map of the lease area are provided below.