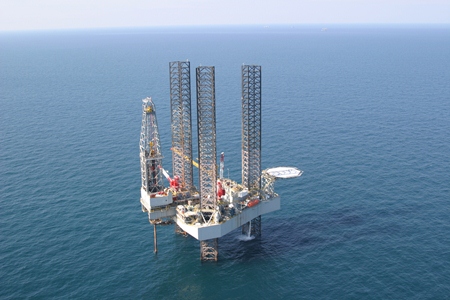 1. What kinds of waste materials can be produced during offshore oil and gas exploration or production activities?

2. Which wastes generated from offshore oil and gas exploration and production activities may be discharged into the ocean?

Routine discharges may include water-based drilling muds and cuttings, synthetic-based mud cuttings, treated produced water, treated sanitary and domestic waste, deck drainage, once-through fire water, and non-contact cooling water.  Other wastes, such as excess cement and bilge and ballast waters, may be discharged at some point in the operation.  All discharges are regulated by the EPA.

The EPA prohibits the discharge of some wastes.  These include oil-based drilling muds and cuttings, produced sands, synthetic-based muds, waste oil, chemical products, and trash and debris, none of which can be discharged into the ocean.

3. What are the alternatives to discharging offshore oil and gas exploration and production wastes into the ocean?

The wastes may be reinjected into geologic formations (i.e., layers of rocks sharing common properties) or disposed of onshore.  Wastes that do not meet regulatory requirements for offshore discharge into the ocean must be properly disposed of or recycled onshore according to state and federal regulations.

4. What agencies and regulations govern the routine discharge of wastes produced by offshore oil and gas exploration and production activities?

Routine discharges of wastes are subject to regulation by the EPA under Section 402(a) of the Clean Water Act (CWA).  The EPA, a regulatory agency, is authorized by Congress to implement pollution control programs and to write and enforce regulations necessary to implement environmental laws, such as the CWA.

The EPA establishes effluent limitation guidelines through a rigorous process to evaluate potential impacts, solicit public review and comment, and set restrictions on the volume and composition of discharges to comply with applicable water quality standards, which are then incorporated into the National Pollutant Discharge Elimination System (NPDES) permitting process.

In 1993, the EPA established guidelines for the discharge of offshore drilling and operational wastes.  NPDES permits contain effluent limitations (developed pursuant to a number of sections of the CWA including 301, 302, 306, 307, and 403) and operating conditions which depend on the permit region.  Operators must apply to the EPA for permit coverage to discharge drilling and production wastes to the Outer Continental Shelf (OCS) before the Bureau of Ocean Energy Management (BOEM) authorizes activities.

BOEM shares in regulating offshore discharges to the ocean. BOEM may require lessees and operators to further regulate effluent discharges by imposing "mitigating measures" on certain operations. Through these measures, BOEM could require operators to (1) conduct a bottom survey to locate sensitive features or areas, (2) relocate operations to avoid sensitive areas, (3) shunt drilling fluids and cuttings to the ocean bottom, thus decreasing the time these materials are suspended in the water column, and (4) regulate discharge rates.

Before a company begins drilling or production activities, BOEM evaluates and approves each plan.  The BSEE also routinely inspects offshore facilities to ensure that permit requirements are being met.

5. What are drilling muds?

During the drilling of a well, drilling fluids or "muds" are used to lubricate and cool the drill bit, control reservoir pressure, and transport the drill cuttings back to the surface.  Drilling discharges are made up of drilling muds that have not stayed in the borehole and cuttings, the crushed rock from the borehole.

Water-based drilling fluids or muds (WBF or WBM) are used at some stage during all well drilling.  The primary components of WBM are fresh or salt water, barite, clay, caustic soda, lignite, lignosulfonates, and water soluble polymers. The specific composition depends on the type of formation (i.e., layers of rocks sharing common properties) being drilled.  WBM and WBM-wetted cuttings may be discharged.

Oil-based drilling fluids or muds (OBF or OBM) are used to improve drilling through difficult formations.  The base mud for OBM is typically diesel or mineral oil.  Because these oils often contain toxic materials such as polynuclear aromatic hydrocarbons (PAHs), the discharge of OBM or cuttings wetted with OBM is prohibited.

Synthetic-based drilling fluids or muds (SBF or SBM) were developed as an alternative to OBM when drilling activities began moving into deeper waters. The base fluid is a synthetic material, typically an olefin or ester, free of toxic PAHs.  Discharge of SBM is prohibited.  However, SBM-wetted cuttings may be discharged after the majority of the SBM has been removed.

Drilling muds are regulated by the EPA and can be discharged into the ocean only if they meet EPA requirements, which include testing for toxicity prior to discharge.  If they fail the toxicity tests, the materials cannot be discharged to the ocean.  The discharges cannot exceed set discharge rates.

6. What is produced water?

Produced water is mainly salty water trapped in the reservoir rock and brought up with oil or gas during production.  It can contain very minor amounts of chemicals added downhole during production.  These waters, which are under high pressures and temperatures, must be treated, because they usually contain oil and metals.  Before being discharged, produced water must meet established limitations on oil content.  As with drilling muds, following treatment, produced water must be tested for toxicity, according to EPA requirements.  If it fails the toxicity test, it cannot be discharged into the ocean.  When discharge into the ocean is permitted, the discharge cannot exceed set discharge rates.

7. Has research been done to determine the effects of these discharges on the marine environment?

Yes.  Offshore drilling and production discharges and their environmental effects have been studied for over 30 years.  In 1973, BOEM (then the Bureau of Land Management) began its Environmental Studies Program to investigate potential effects of oil and gas production activities on the marine environment.

Key concerns include the fate of the discharges in the environment, including dispersion, degradation, and deposition resulting in smothering and alteration of the seafloor environment.  Also of concern are acute and chronic toxic effects on plant and animal life both in the water column and at the ocean floor.

In general, study results indicate that the observable effects are limited to radial distance of 100 to 1,000 meters from the discharge point; the area is greater in deep waters.  Assuming that mitigation measures are implemented, acute responses to drilling discharges are unlikely.

BOEM-sponsored studies are available to the public.  Reports from the Environmental Studies Program may be searched and downloaded at: https://www.boem.gov/ESPIS/