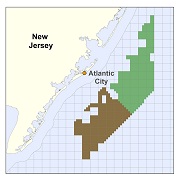 On March 30, 2021, BOEM published a Notice of Intent to Prepare an Environmental Impact Statement for Ocean Wind, LLC's Proposed Wind Energy Facility Offshore New Jersey. The following documents are available for your viewing.

BOEM’s scoping process is intended to identify what should be considered in the Ocean Wind COP EIS. Throughout the scoping process, there will be multiple opportunities to help BOEM determine the important resources and issues, impact-producing factors, reasonable alternatives, and potential mitigating measures that should be analyzed in the EIS.  Virtual scoping meetings were held on April 13, 2021, April 15, 2021 and April 20, 2021.  More information is available at https://www.boem.gov/ocean-wind-1.

The Outer Continental Shelf (OCS) Lands Act requires BOEM to award leases competitively, unless BOEM determines there is no competitive interest. In April 2011, BOEM published the Call for Information and Nominations – Commercial Leasing for Wind Power on the Outer Continental Shelf Offshore New Jersey in the Federal Register for public review. The purpose of the “Call” was to determine if competitive interest existed for the construction of an offshore wind facility offshore New Jersey in addition to requesting information about site conditions, resources, and multiple uses within the area identified within the Federal Register Notice that would be relevant for commercial wind leasing.

Materials relating to the “Call” are below.

The public comment period for the Call closed on June 6, 2011. In response, BOEM received 11 commercial indications of interest to obtain a commercial lease for a wind energy project. BOEM initiated a review of these parties' submissions to assess filing completeness, as well as legal, technical, and financial qualifications to hold an OCS renewable energy commercial lease. BOEM also received a number of comments, which can be viewed by clicking here.

The Department of Energy's National Renewable Energy Laboratory (NREL), under an interagency agreement with BOEM, is provided technical assistance to identify and delineate leasing areas for offshore wind energy development within Wind Energy Areas on the Atlantic Coast. In October 2013, NREL submitted a report to BOEM that focuses on the New Jersey Wind Energy Area. To access the report, click here.

On July 17, 2014, BOEM announced that the Atlantic Wind Lease Sale 5 Proposed Sale Notice (PSN) would be published in the Federal Register on July 21, 2014. The Notice requested public comments on BOEM’s proposal to auction two leases offshore New Jersey for commercial wind energy development. Information related to the PSN is located below.

On Feb. 3, 2012, BOEM published in the Federal Register a Notice of Availability of an Environmental Assessment (EA) and Finding of No Significant Impact (FONSI) for commercial wind lease issuance and site assessment activities on the Atlantic OCS offshore New Jersey, Delaware, Maryland, and Virginia. Consultations ran concurrently with preparation of the EA and included consultations under the Endangered Species Act, Magnuson-Stevens Fishery Conservation and Management Act, Section 106 of the National Historic Preservation Act, and the Coastal Zone Management Act. On July 11, 2012, BOEM issued a “Finding of No Historic Properties Affected for the Issuance of Commercial Leases within the New Jersey Wind Energy Area."

On September 23, 2015, BOEM announced that it published a Final Sale Notice, which stated a commercial lease sale (i.e., auction) would be held November 9, 2015, for the Wind Energy Area (WEA) offshore New Jersey. The auction represents the fifth competitive lease sale for renewable energy on the OCS.

The New Jersey WEA was auctioned as two leases (OCS-A 0498 and OCS-A 0499). Materials related to the Final Sale Notice are below.

The area available for auction is identical to the one announced in the Proposed Sale Notice (PSN) published in the Federal Register in July 21, 2014 for a 60-day public comment period. BOEM carefully considered public comments received during this time prior to developing the Final Sale Notice, as discussed in the Response to Comments above.

The commercial wind energy leases were signed by BOEM on February 4, 2016, and went into effect on March 1, 2016. The executed leases are available below.

On​ April 14, 2016, BOEM received an application to assign 100% of commercial lease OCS-A 0498 to Ocean Wind LLC. BOEM approved the assignment on May 10, 2106. The approved assignment is available through this link: www.boem.gov/Assignment-Approval-Lease-OCS-A-0498/

On September 15, 2017, Ocean Wind LLC submitted a Site Assessment Plan (SAP) for commercial wind lease OCS-A 0498 which was subsequently revised on November 10, 2017, January 25, 2018 and February 23, 2018. BOEM is reviewing the SAP and will approve, disapprove, or approve with modifications the proposed site assessment activities.

On May 16, 2018, the Bureau of Ocean Energy Management approved the Site Assessment Plan (SAP) for Lease OCS-A 0498 (Ocean Wind LLC). The SAP approval allows for the installation of two floating light and detection ranging buoys (FLiDARs) and one metocean/current buoy. For additional information, please find the approved SAP below:

On November 16, 2018 BOEM received an application from U.S. Wind Inc. to assign 100% of commercial lease OCS-A 0499 to EDF Renewables Development, Inc. BOEM approved the assignment on December 4, 2018. The approved assignment is available through this link: www.boem.gov/Assignment-Approval-Lease-OCS-A-0499/

On April 29, 2019 BOEM received an application from EDF Renewables Development, Inc. to assign 100% of commercial lease OCS-A 0499 to Atlantic Shores Offshore Wind, LLC. BOEM approved the assignment on August 13,2019. The approved assignment is available through this link: www.boem.gov/OCS-A-0499/.