The Notice of Availability for the Empire Wind DEIS published in the Federal Register on November 18, 2022, opening a 60-day public comment period, which ends at 11:59 p.m. ET on January 17, 2023. The input received via this process will inform preparation of the Final Environmental Impact Statement (EIS).

The following documents are available for your viewing.

During the comment period, BOEM will hold three virtual public meetings, where the public can learn more about the review process, EIS schedule, potential impacts from the proposed project, and proposals to reduce potential impacts. There will also be an opportunity for participants to provide comments on the DEIS.

The public meetings will be held on the following dates and times. All times are Eastern:

More information, including meeting registration and instructions for commenting, is available in the Virtual Meeting Room.

Comments can be submitted in the following ways:

On September 8, 2011, BOEM received an unsolicited request from the New York Power Authority (NYPA), Long Island Power Authority (LIPA), and Consolidated Edison (ConEd) for a commercial lease from NYPA. The proposal includes the installation of up to 194, 3.6 megawatt (MW) wind turbines, yielding a potential 700 MW of wind energy generation. A copy of the application is available below: 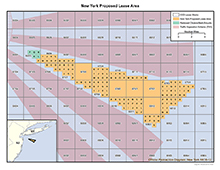 On Jan. 4 2013, BOEM issued a Request for Interest in the Federal Register under Docket ID: BOEM-2012-0083 to assess whether there are other parties interested in developing commercial wind facilities in the same area proposed by NYPA. In addition to inquiring about competitive interest, BOEM also sought public comment on the NYPA proposal, its potential environmental consequences, and the use of the area in which the proposed project would be located.

Call for Information and Nominations

After reviewing nominations of interest received in response to the Request for Interest, BOEM determined that competitive interest in the area proposed by NYPA exists, and initiated the competitive leasing process pursuant to 30 C.F.R. 585.211. Subsequently, on May 28, 2014, BOEM published a “Call for Information and Nominations” (Call) to seek additional nominations from companies interested in commercial wind energy leases within the Call area offshore New York (see map below). BOEM also sought public input on the potential for wind development in the Call Area, including comments on site conditions, resources, and existing uses of the area that would be relevant to BOEM’s wind energy development authorization process. Materials relating to the “Call” are below:

BOEM published a Notice of Intent (NOI) to prepare an Environmental Assessment (EA) on May 28, 2014. The purpose of the EA is to determine whether there are significant impacts associated with issuing a lease, conducting site characterization surveys, and conducting site assessment activities (e.g., the installation of a meteorological tower and/or buoys) within the proposed area. Through the NOI, BOEM sought public input on the environmental and socioeconomic issues to be considered, as well as alternatives and mitigation measures. The NOI and public comments are provided below.

On March 16, 2016, the Department of the Interior announced that BOEM has identified a Wind Energy Area (WEA) offshore New York. Additional information about BOEM’s decision can be found below.

BOEM published an EA for a 30-day public comment period on June 6, 2016. In response to stakeholder requests, BOEM extended the public comment until July 13, 2016.

After reviewing comments received on the environmental assessment, BOEM decided to remove five aliquots (about 1,780 acres) from the WEA due to environmental concerns over sensitive habitat on Cholera Bank. In a comment letter, the National Marine Fisheries Service (NMFS) identified the Cholera Bank feature as a sensitive habitat to be avoided for the placement of site assessment structures. As a result of this removal, the revised lease area is approximately 2% smaller than the lease area considered in the initial environmental assessment and Proposed Sale Notice.

BOEM has undertaken a project to develop visual simulations of a hypothetical wind energy facility on the Outer Continental Shelf offshore Long Island, NY. Additional information on the study can be found here.

Correspondence Referenced in the PSN

On October 27, 2016, BOEM announced the publication of the Final Sale Notice (FSN) for a lease sale offshore New York and the availability of a revised environmental assessment for site assessment and site characterization activities in the area. The lease area is located 11.5 nautical miles (nm) from Jones Beach, NY. From its western edge, the area extends approximately 24 nautical miles southeast at its longest portion. The project area consists of 5 full OCS blocks and 143 sub-blocks. Materials related to the FSN are below:

On November 18, 2016, BOEM held a seminar to educate bidders on changes to the auction format announced in the Final Sale Notice. A recording of the seminar is available through this link: www.boem.gov/New-York-Auction-Education-Seminar/.

On December 15-16, 2016, BOEM held a lease sale (i.e., auction) for an area offshore New York, referred to as the “New York lease area.” The auction lasted 33 rounds. Statoil Wind US LLC, which bid just under $42.5 million was the winner of lease area OCS-A 0512. A summary of the bidding results can viewed at: www.boem.gov/Bid-Summary-ATLW-6/.

The commercial wind energy lease was signed and executed by BOEM on March 15, 2017.

Empire Wind submitted its COP on January 10, 2020. An updated COP was submitted on April 14, 2021. BOEM will review the COP and approve, disapprove, or approve with modifications the proposed activities.

On June 24, 2021, BOEM published a Notice of Intent to Prepare an Environmental Impact Statement for the Empire Wind project offshore New York.

The Notice of Intent initiated a 30-day public comment period that ended on July 26, 2021.

On November 18, 2022, BOEM announced the availability of the Draft Environmental Impact Statement (DEIS) for the proposed Empire Wind energy project offshore New York. The Notice of Availability and DEIS can be accessed using the links below.