On June 8, 2022, BOEM published a Notice of Intent to (NOI) Prepare an Environmental Impact Statement (EIS) for US Wind’s wind project offshore Maryland.

The virtual scoping meetings were held on:

Following the comment period, BOEM will review the comments received to identify issues and potential alternatives for consideration in the US Wind Draft EIS.

Maryland Task Force Roster (May 2018) - If you would like to provide updated contact information to BOEM, please reach out to jeffrey.browning@boem.gov. 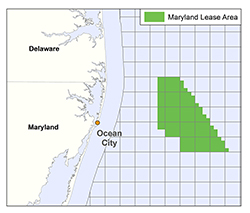 Nov. 2010: BOEM initiated the leasing process offshore Maryland by issuing a Request for Interest (RFI) to gauge industry’s interest in obtaining commercial wind leases in an area offshore of Maryland. Materials relating to the RFI are provided below.

Call for Information and Nominations

Feb. 2012: BOEM published a Call for Information and Nominations (“Call”) to solicit lease nominations and request public comments about site conditions, resources and other existing uses of the identified area that would be relevant to BOEM’s potential leasing and development authorization process. Materials relating to the Call are below.

Feb. 3, 2012: BOEM also published in the Federal Register a Notice of Availability of an Environmental Assessment (EA) and Finding of No Significant Impact (FONSI) for commercial wind lease issuance and site assessment activities on the Atlantic OCS offshore New Jersey, Delaware, Maryland, and Virginia.

Consultations ran concurrently with preparation of the EA and included consultations under the Endangered Species Act, Magnuson-Stevens Fishery Conservation and Management Act, Section 106 of the National Historic Preservation Act, and the Coastal Zone Management Act.

June 2012: BOEM published a Finding of No Historic Properties Affected for the Issuance of Commercial Leases within the Maryland Wind Energy Area.

Dec. 18, 2013: BOEM published a Proposed Sale Notice (PSN) in the Federal Register, which describes proposed terms and conditions for a lease sale for two commercial wind energy leases in the Maryland Wind Energy Area (WEA). A public seminar regarding this PSN was held in Baltimore on January 24, 2014. The 60-day public comment period for the PSN ended on Feb.18, 2014. In response, BOEM received 19 comment submissions and seven additional qualifications packages from companies wishing to participate in the auction. Public comments received are available by clicking here.

Correspondence Referenced in the PSN:

The WEA covers approximately 80,000 acres, and its western edge is located about 10 nautical miles from the Ocean City coastline. It was auctioned as two leases, referred to as the North Lease Area (32,737 acres) and the South Lease Area (46,970 acres). Materials related to the Final Sale Notice are below.

The area available for auction is identical to the one announced in the Proposed Sale Notice (PSN) published in the Federal Register on Dec. 18, 2013 for a 60-day public comment period. BOEM carefully considered public comments received during this time prior to developing the Final Sale Notice, as discussed in the Response to Comments above.