The Civil War in the Gulf is defined by the Northern strategy of the blockade of Southern ports and the daring attempts by Confederate vessels to run this blockade. A number of important Civil War vessels have been located in state waters, such as the Confederate ironclads CSS Louisiana in Plaquemines Parish, Louisiana, and the Huntsville and Tuscaloosa in the Mobile River. The remains of the Union ironclad Tecumseh, whose sinking by a Confederate mine prompted Farragut’s famous order "Damn the torpedoes, full speed ahead!" are well known off Fort Morgan, Alabama. Only one U.S. warship, however, was sunk at sea in the Gulf. This important shipwreck, the USS Hatteras, has been the subject of repeated investigations by BOEM, the Texas Historical Commission, and Texas A&M University at Galveston.

Constructed in 1861 by the Harlan and Hollingsworth Company of Wilmington, Delaware, for the Charles Morgan line of Gulf coast steamships, the vessel was originally known as the St. Mary. An iron-hulled steamer of 1450 tons, the side-wheel steamer was purchased by the U.S. Navy in September 1861 and converted into a gun boat during the same year. The vessel was armed with four 32-pounder cannon (a 20-pounder rifled cannon was added later) and renamed Hatteras. After distinguished service in the South Atlantic Blockading Squadron, the vessel was transferred to the Gulf Blockading Squadron on January 26, 1862. In less than a year, the Hatteras captured seven Confederate blockade runners off Vermilion Bay, Louisiana. Early in 1863, she was ordered to join the squadron under Rear Admiral David Farragut, who was attempting to retake the key Texas port of Galveston, Texas.

As the blockading squadron lay off the coast on the afternoon of January 11, 1863, a set of sails was sighted just over the horizon and the Hatteras was ordered to give pursuit. She chased the intruder for four hours, closer and closer into shore, and farther and farther from her supporting fleet. Finally, as dusk was falling, the Hatteras came within hailing distance of the square-rigged, black-hulled vessel. Commander Homer C. Blake demanded to know the identity of the ship. "Her Britannic Majesty’s Ship Vixen," came the reply. Blake ordered one of Hatteras’ boats launched to inspect the "Britisher." Almost as soon as the boat was piped away, a new reply came from the mystery ship, "We are the CSS Alabama!" A broadside from the Alabama’s guns punctuated the reply. Within 13 minutes, the Hatteras, sinking rapidly, surrendered. 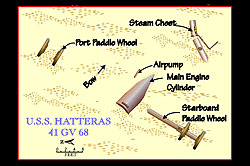 The Hatteras today rests in 58 feet of water about 20 miles off Galveston. Her 210-foot long iron hull is completely buried under about three feet of sand. Only the remains of her 500-horsepower walking beam steam engine and her two iron paddle wheels remain exposed above the sea floor. Since the site’s discovery in the 1970's, BOEM has engaged in periodic monitoring of the wreck to ensure that it is not damaged by surrounding oil and gas lease development. Although the wreck remains the property of the U.S. Navy, BOEM has joined forces with the THC and Texas A&M at Galveston to preserve this important archaeological treasure for posterity. 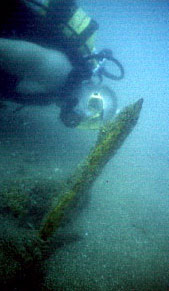 The wreck of the US Hatteras is an integral part of the story of the Civil War on the Texas coast, the defense of which is regarded as one of the greatest military feats of the Confederacy. The ship’s dramatic history, along with the fact that the remains of the vessel are virtually intact, make it one of the most important underwater archaeological sites in the United States.