Federal law defines an historic site as being at least fifty years old. As a result, wrecks associated with World War II now meet that criterion. Nearly all the shipwrecks in the Gulf from that period relate to one cause - attack by the German submarines known as "U-boats." U-boat comes from the German word "Unterseeboot."

During the years 1942 and 1943, a fleet of over 20 German U-boats cruised the Gulf, seeking to disrupt the vital flow of oil carried by tankers from ports in Texas and Louisiana. They succeeded in sending 56 vessels to the bottom; 39 of these are now believed to be in state or Federal waters off Texas, Louisiana, and Florida. After their initial, devastating success, U-boat attacks in the Gulf became rare by the end of 1943 after merchant vessels began cruising in armed convoys. The opening of the "Big Inch" pipeline from Texas to New Jersey also contributed to freeing the war effort from relying on ships to transport crude oil. 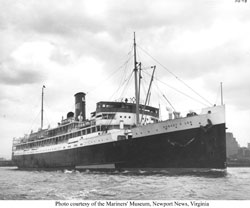 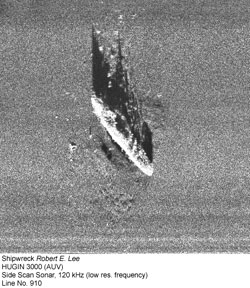 As a result of remote-sensing surveys required of the oil and gas industry by the MMS, several U-boat casualties have been located on the sea floor. These include the Heredia, a United Fruit Company freighter; the oil tanker Sheherezade; the Gulfpenn, which carried 90,000 barrels of fuel oil; and the Robert E. Lee, a passenger freighter sunk by the U-166.

The U-166 was the only German U-boat sunk in the Gulf. The U-166 was discovered in May 2001 during a routine pipeline survey conducted by C&C Technologies for BP and Shell. The submarine lies in 5,000 feet of water within a mile of her last victim, the passenger ship SS Robert E. Lee. Popular belief has long held that the U-166 had been sunk by a torpedo dropped from a U.S. Coast Guard Utility Amphibian J4F aircraft over 100 miles away from its actual location on August 1, 1942. It is now believed that the sub was sunk two days earlier by depth charges from the Robert E. Lee’s naval escort, the U.S. Navy sub-chaser, PC-566. Another German submarine, the U-171, which was operating in the Gulf at the same time, may actually have been the vessel spotted by the J4F aircraft.

Further information on World War II shipwrecks in the Gulf of Mexico can be accessed through the P.A.S.T. Foundation.

Dan Warren. 2004. ROV Investigations of the DKM U-166 Shipwreck Site to Document the Archaeological and Bioligical Aspects of the Wreck Site Final Performance Report