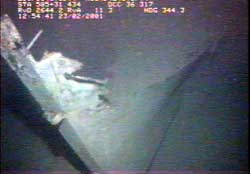 The deepwater portion of the Gulf of Mexico (defined as 1,000 feet of water or greater) has shown a remarkable increase in oil and gas exploration, development, and production. In part this is due to the development of new technologies reducing operational costs and risks, as well as the finding of reservoirs with high production wells. Currently, there are 45 rigs working in water depths over 1,000 feet and in May 2001 a new world record for drilling in deep water was set by Union Oil Company when they drilled an exploration well in 9,687 feet of water in Alaminos Canyon Block 903.

Several new shipwrecks sites have been discovered within the last year as a result of remote sensing surveys conducted by the oil and gas industry for pipeline and well sites in the deepwater areas of the Gulf. These wrecks include a copper-sheathed vessel at 2650 feet, and World War II wrecks at depths greater than 5,000 feet.

The discovery of the wreck of the steam yacht Anona was reported to MMS in July 2002 by BP Exploration, Inc. following an examination of the site by C&C Technologies, Inc. The wreck lies in 4,000 feet of water in the Viosca Knoll Area and was identified using a combination of remote sensing instruments packed into C&C’s Hugin 3000 Autonomous Underwater Vehicle (AUV) and cameras mounted on a Remotely Operated Vehicle (ROV). C&C archaeologist Daniel Warren researched the shipwreck and made the final identification. 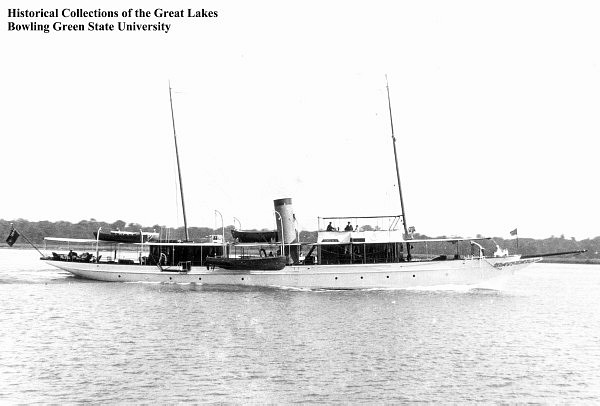 The Anona was a 117-foot long, steel-hulled, propeller-driven steam yacht built for the wife of wealthy Detroit industrialist Theodore DeLong Buhl in 1904 by the well-known yard of George Lawley & Sons in Boston. Lawley & Sons was famous for building several America’s Cup winners during the early 1900s. Although constructed of steel, the elegant lines of this vessel are strongly reminiscent of wooden-hulled sailing schooners of the same period; down to the floral scrollwork decorating the billet at the bow. The interior of the Anona was sumptuously appointed with “a social hall in the after deckhouse, finished in mahogany and containing piano, desk, etc.” The forward stateroom, used by the owner, was described as “exceptionally large,” occupying the full width of the boat. The owner’s cabin also boasted a large private bath with a “tub, closet (head), and wash basin.” A dining salon and pantry were located in the forward deckhouse.

The Anona was owned by Mr. Buhl until his death in 1907, when it passed to Buhl’s wife Elizabeth, the daughter of Hiram Walker, founder of Canadian Club Whiskey Distillery. Mrs. Buhl continued ownership of the vessel until 1924, when she sold it to a Canadian, Alfred E. Mathers. The Anona passed through a number of Canadian owners until it eventually became the property of the Pan-American Banana Producers Association of Montreal in 1943. After having begun life as an industrialist’s luxury yacht, the Anona met a somewhat ignominious end in 1944 when it sank in the Gulf of Mexico carrying potatoes to the British West Indies after the plates under the steam engine buckled. The 9-man crew was rescued by three PBY planes after spending two days adrift in a raft.

The wreck of the Anona is in an excellent state of preservation, sitting upright on its keel in 4,000 feet of water. It is buried in the bottom to just above what would have been the vessel’s waterline, but the deck is relatively clear of sediment. Most of the wooden decking has deteriorated, but the steel hull and machinery appear to be in perfect condition. Once the setting of glittering soirees for Detroit’s social elite, it now is home only to countless anemones and crabs in a world of eternal darkness beneath the sea. 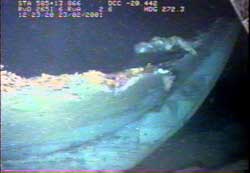 Discovered in February 2001 by ExxonMobil Development Company during a pipeline survey, this unique wooden-hulled vessel lies in over 2,650 feet of water in an area of the Gulf known as Mississippi Canyon. All that remains of the vessel is its lower hull, which is clad in copper sheathing and shows some evidence of burning. MMS archaeologists believe that a fire on board the ship may have been the cause of its sinking.

The lower part of the shipwreck is almost completely intact and sitting upright on the seafloor. The ship is about 60 feet long and its wooden hull is covered with thin copper sheets, a means of protecting ships from wood-eating marine organisms that was used by shipbuilders from the end of the 1700s to the mid-1800s. Since copper sheathing was quite expensive, it is unusual to find it on small merchant vessels, which has led the MMS archaeologists to speculate that this could have been a naval vessel.

Wood samples recovered from the wreck site have been identified as American White Pine, which is native to the Atlantic coast north of Virginia. The name of the vessel or what it was doing off Louisiana is unknown, scientists hope to solve this mystery next summer with a combination of state-of-the-art technology and old-fashioned library research.

ExxonMobil, who first reported the discovery to MMS, sponsored a preliminary expedition to photograph the site. Funding for further investigation of this unique wreck was provided by ExxonMobil and its venture partner BP. A report of this investigation was submitted to MMS by Texas A&M University and is available online through the Environmental Studies program Information System (ESPIS) under Study No. MMS 2006-072. 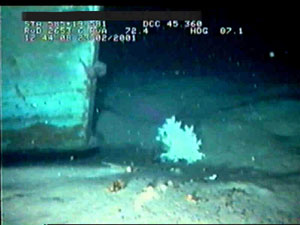 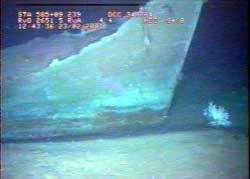