On July 1, 2022, the Department of the Interior (DOI) announced the availability of the Proposed Program for the 2023-2028 National Outer Continental Shelf Oil and Gas Leasing Program (National OCS Program), as well as the Draft Programmatic Environmental Impact Statement for the 2023-2028 Program (Draft PEIS) for public comments.

The Proposed Program includes no more than ten potential lease sales in the Gulf of Mexico (GOM) and an option for one potential lease sale in the northern portion of the Cook Inlet of Alaska. No lease sales are proposed for the other Alaska planning areas, nor for the Atlantic or Pacific planning areas during the five-year period. Click on the “Proposed Lease Schedule” tab above for the proposed schedule.

A Notice of Availability (NOA) published in the Federal Register on Friday, July 8, 2022. Publication of the NOA initiated a 90-day public comment period, which closed on Thursday, October 6, 2022.

Click on the accordions below to read information about the National OCS Oil and Gas Leasing Program development process, analysis and how to provide comments.

Information about the National Environmental Policy Act (NEPA), the Draft PEIS, prepared following the process prescribed by the National Environmental Policy Act (NEPA) and in accordance with the April 2022 revised NEPA regulations. The Draft PEIS includes an analysis of the proposed action, alternatives, and cumulative and cross-boundary impacts.

The OCS Lands Act (OCSLA) charges the Secretary of the Interior with establishing a schedule of lease sales for a five-year period by evaluating specific factors of OCS regions and selecting the size, timing, and location of proposed OCS lease sales that best meet regional and national energy needs. BOEM is the agency under the Interior Department responsible for administering and advising the Secretary about the National OCS Program.

When approving a National OCS Program, the OCS Lands Act requires the Secretary to consider eight factors, including the:

The National OCS Program development process for years 2023-2028 started with the broadest consideration of areas available for leasing.

The first step in the development process, a Request for information, was published in the Federal Register on July 3, 2017, with a 45-day comment period that ended on August 17, 2017. Per statute and consistent with previous efforts, BOEM evaluated all 26 of the OCS planning areas during this first stage and, therefore, requested comments on all areas.

The first of three proposals, the Draft Proposed Program (DPP), was released in January 2018, with a 60-day comment period that ended on March 9, 2018. The DPP included 47 potential lease sales in 25 of the 26 planning areas – 19 sales off the coast of Alaska, 7 in the Pacific Region, 12 in the Gulf of Mexico, and 9 in the Atlantic Region.

Following publication of the DPP, BOEM considered more than 2 million comments from the public and stakeholders, including governors, Federal agencies, state agencies, local agencies, energy and non-energy industries, Tribal governments, non-governmental organizations, which include environmental advocacy groups, and the public. Comments received in response to the DPP ranged from supporting exploration and development of the entire OCS, to opposing all such exploration and development. Comments can be viewed online at Regulations.gov.

Proposed Program and Next Steps

Release of the Proposed Program follows the 2018 publication of the DPP and is the second in a series of three proposals required before Secretary Haaland can take final action to approve the 2023-2028 Program.

The Secretary requests public and stakeholder input on the Proposed Program to inform the Proposed Final Program – the final of the three proposals - and its accompanying Final PEIS analyses. As such, publication of the Proposed Program initiated a 90-day public comment period, during which four virtual meetings will be held.

Publication of the NOA in the Federal Register on July 8, 2022, formally starts the 90-day public comment period.

When the Proposed Final Program and Final PEIS are published, the Secretary will wait at least 60 days to officially approve the program and finalize the Record of Decision. 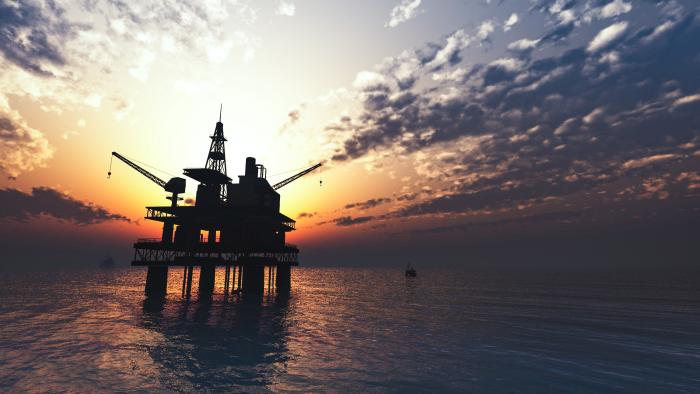 The previous Five Year Program information can be found below.

BOEM is the agency in the Department of the Interior that oversees science-informed management of oil and gas, renewable energy, and mineral resources on the Outer Continental Shelf (OCS). BOEM currently manages approximately 2,000 active OCS oil and gas leases, covering nearly 11 million acres – the vast majority of which are in the Gulf of Mexico.

The National OCS Program consists of a schedule of oil and gas lease sales indicating the size, timing, and location of proposed leasing activity that the Secretary of the Interior determines will best meet national energy needs for the five-year period following its approval.

The OCS Lands Act states that the timing and location of exploration, development and production of oil and gas among the OCS regions must be based on a consideration of these eight specific factors:

In determining the timing and location of leasing, the Secretary must balance the potentials for environmental damage, discovery of oil and gas, and adverse impact on the coastal zone.

The Secretary has the discretion to reach a reasonable determination based on all existing factors.

The OCS Lands Act prescribes the major steps for developing a National OCS Program, including opportunities for public comment.  The process includes the following steps for the 2023 – 2028 National Program:

On July 8, 2022, BOEM published the Proposed Program and Draft PEIS for a 90-day public comment period.

Inclusion of an area in the Proposed Program is not a final determination that the area will be included in the PFP. 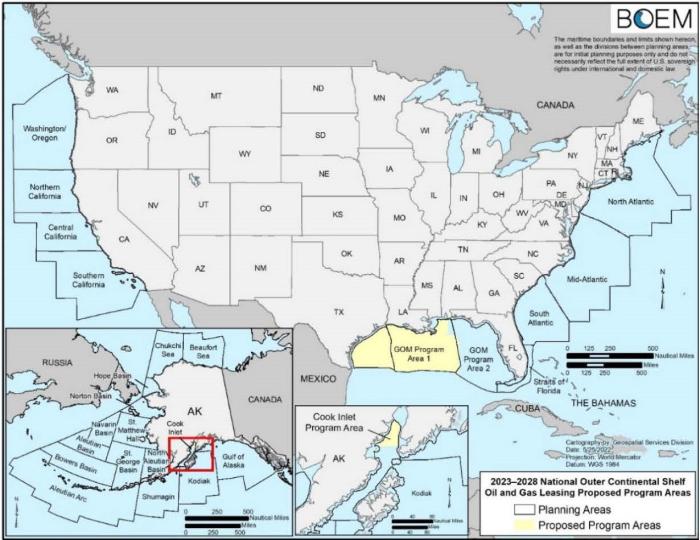 BOEM has developed a PEIS pursuant to the National Environmental Policy Act (NEPA) to inform the development of the National OCS Program. The Draft PEIS analyzes the potential environmental impacts from activities that could occur based on the proposed schedule of lease sales in the DPP.

In addition, BOEM conducts NEPA reviews for each lease area before a lease sale is held, including site-specific analyses, so that the most current data can be incorporated. These additional NEPA reviews will also include opportunities for public involvement; additional public comment opportunities are included after publication of the call for information and proposed notice of sale steps of the lease sale process.

A Record of Decision is the final step in the NEPA process for an environmental impact statement. It is a concise public document that records a federal agency’s decision concerning a proposed action for which the agency has prepared an Environmental Impact Statement.

After obtaining a lease, a company must file an exploration plan before drilling any wells and that is subject to a technical and environmental review by BOEM and regulatory supervision by the Bureau of Safety and Environmental Enforcement (BSEE). Once a discovery is made that the company is interested in developing, it must file a development and production plan for BOEM to again conduct a technical and environmental review before production could begin. For major facilities, BSEE conducts an onsite inspection before allowing production to begin. Often this is a joint inspection with the US Coast Guard. Air emissions permits and water discharge permits must also be obtained as required by law. BSEE has inspectors that daily fly offshore to conduct safety and environmental inspections.

In a mature area such as the Gulf of Mexico, it generally takes four to ten years from the time a lease is issued before production begins; shallow waters take less time and deep and ultradeep waters take longer. In a frontier area where leasing has never occurred or not occurred in many years, the time would likely be longer depending on the challenges presented in the area. The Proposed Program document presents this information in Figure 5-1.

The timeline of an oil and gas lease can vary depending on whether hydrocarbons are found on the lease. By statute, a lease is granted for a primary term of five years, unless BOEM determines that the lease is located in unusually deep water or involves other unusually adverse conditions, in which case the maximum primary term is 10 years.

The primary term is specified in the Notice of Sale prior to a lease sale and included in the lease itself. In order to maintain a lease beyond the primary term, lessees must be undertaking operations with the objective of establishing production or demonstrating production of oil and gas in paying quantities.

The President and Congress have other mechanisms, such as Congress enacting new legislation or the President withdrawing areas of the OCS from consideration for leasing under the OCS Lands Act section 12(a), that could alter the scope of the Department’s offshore leasing activities.

The planning areas are for administrative purposes only. They originated with the first program (1980–1985) after the 1978 Amendments to the OCS Lands Act called for a Program. Before that, sales were strictly individually based, and the areas offered were due to industry nominations or as BOEM (then the Minerals Management Service) deemed necessary. A very limited number of blocks were offered for lease in a sale. When the OCS Lands Act required a way to compare areas that may or may not be smaller than regions, planning areas were created. Not all of the OCS had a planning area in the beginning, and some have changed names and area boundaries over time.